Antisemitism from the Enlightenment to World War I

Scholars describe the persistence of antisemitism in Europe from the Enlightenment through World War I and explain how new social, political, and pseudo-scientific justifications were created to perpetuate old prejudices.
Last Updated: April 7, 2022 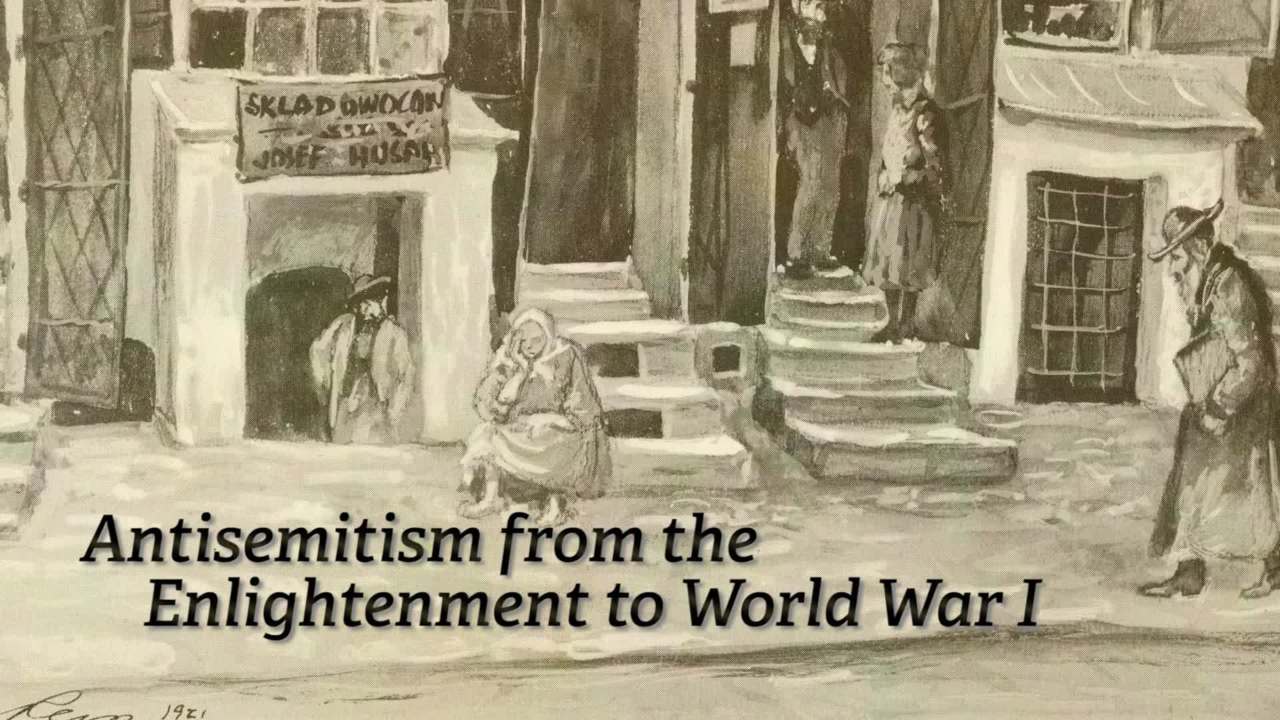 Throughout the Middle Ages, religious prejudice and waves of anti-Jewish violence increasingly forced Jews to live life on the margins of society. And by the 17th century, the majority of Jewish people lived in areas of Poland and Eastern Europe, in poor, isolated communities known as shtetls. And their interactions with non-Jews often bred distrust.

Because Jews played peripheral roles in society-- they weren't allowed to own land, they weren't allowed, for example, in certain areas to be part of the guilds-- therefore, they had to earn their economic life on the margins of society. That then got translated into the idea that Jews had all the money, because in reality they sometimes played the intermediary role between the noblemen and the peasantry.

When a farmer would sell his produce to the Jew who would bring it to the marketplace, he would wonder why he didn't collect everything. Why did the Jew make certain profit off the transaction? And then there would always be the question, did he give me a fair break? Did he give me a fair share? And that makes every interaction a tense interaction.

For the smaller number of Jews living in parts of Western and Central Europe, this marginal existence would soon change dramatically. The Scientific Revolution and the Age of Enlightenment, which began in the 17th and 18th centuries, influenced many countries in Europe to emphasize ideals of individual liberty, tolerance, reason over tradition, and the separation of church and state.

In 1789, France became the first country to grant its Jews full rights of citizenship, and many others would follow soon after. This legal transformation became known as Jewish emancipation, and it began a new chapter in Jewish life.

Suddenly, some Jews found that they were well positioned to succeed in this rapidly changing society.

Now, there are good sociological reasons for why that was the case. Jews were already much more literate and well educated than most other groups that were around them. And education as a means to social advancement became very important in modernity. It meant that you could now enter into all of the liberal professions. And so they end up becoming very visible embodiments of modernity itself.

While it is true that more Jews than ever were succeeding in becoming visible and more powerful members of society, on the whole, Jews accounted for only a very small percentage of the population in the late 1800s, and the vast majority of Jews did not become wealthy or powerful. Still, these gains drew resentment from those who were not poised to cope with the changes that new ideas and new industries had brought to Europe.

It was a time in which whole professions were driven out of business. These are trades that used to exist, and thousands of people were employed in them. But they didn't exist by 1880, because almost all of this was being done by machines and factories had replaced them, and so forth. What's more-- and what appears to be particularly galling to some Christians in Europe-- is this emancipation creates the opportunity for Jews to rise above some Christians, and to in fact give instructions and orders to some Christians. And that becomes the fodder, if you will, for an enormous backlash.

For more than 1,000 years, myths born of Christian religious writing and imagery had been used to justify the persecution of Jewish people. But in an increasingly scientific and secular society, opponents to Jewish ascension set out to justify old hatreds with the language of science. One way they did this was to claim there was a scientific rationale for keeping Jews from continuing to climb the economic and social ladder.

In 1879, a German publicist named Wilhelm Marr published a book which falsely argued that Jewish emancipation had allowed Jews to take control of German industry, and he formed what he called the League of Antisemites to combat their continued assimilation. While the idea of the Jews as a race of people rather than a religious group had roots dating back to Spain hundreds of years earlier, referring to the Jews as Semites was new, as was Marr's claim that the Germans and Jews had been in a longstanding racial battle that could only end when one group had eliminated the other.

Marr was not alone. Around the world, old prejudices were being justified in the name of race science and eugenics. Supporters of race science argued that some races were superior to others, and that the differences between groups were not a matter of beliefs or circumstances, but instead, the differences were biological and passed on in the blood. Suddenly, people who believed society was better before Jewish emancipation had what they considered a scientific term for their beliefs: antisemitism.

Even in France, the first country to emancipate the Jews, a major scandal demonstrated antisemitic backlash. A Jewish military captain named Alfred Dreyfus was falsely accused of treason and initially sentenced to life in prison.

In France, 100 years after the emancipation, they brought a Jewish captain to trial and they were chanting in the street, death to the Jews. Not death to the traitor, not death to Dreyfus, not death to the captain, but death to the Jews. Meaning they didn't see him as an individual, they saw him as a member of the class. So it showed that both the peasantry and the nobility could join together in France to attack what? The Jew who had been framed for a crime he did not commit.

In the late 19th century, early 20th century they developed another myth, which is called The Protocols of the Elders of Zion.

The Protocols of the Elders of Zion is a fabrication. It was purported to be the secret minutes of leaders who had come together in Basel in 1897 for the First Zionist Congress. There was such a conference. There were no such minutes. And those minutes purported to show that Jews wished to dominate the world and to show how they planned to take over the world.

Now, everywhere in Europe in the last 30 years of the 19th century, there was this backlash, and there was a vivid and vocal antisemitic movement. In almost every country, these movements were complete failures. And in Germany, this was particularly true.

Emancipation came to Germany in 1871. The antisemites ran in political elections year in, year out. They won very few seats. They never won more than 5% of the vote. And so anti-Semitism appeared to be in Germany something that had adherents, but it was not persuasive. It didn't have political traction. And this was more or less true in a lot of other countries. I mean, even the Dreyfus affair, which was the most sensational antisemitic development of the late 19th century, was reversed. Dreyfus was ultimately vindicated, and his rank was restored, and so forth.

Now, World War I changed all that. And it changed all that in profound ways. In Germany, it gave fuel to a scapegoating theory that the reason why the war isn't going well is that Jews are undercutting the war effort. Then what made this doubly tempting was the intervening events in Russia in 1917, because a Bolshevik revolution had overthrown the Tsar. Some of the leading people in the Bolshevik Revolution were Jews. Leon Trotsky, the head of the Red Army, was particularly important. And then in 1918, when the Germans were defeated and there were revolutions within Germany, there were a number of prominent leaders of those revolutions who were Jews.

After the war, a great many people feel that their lives are much worse than they were before the war. The dislocation caused by the war is one reason. Germany's troubles were particularly intense. But this created a greater receptiveness to arguments that said, you're not at fault for what's wrong. There are ways to fix this by getting at the people who are doing the bad things.

As people in Germany and Eastern Europe struggled to right themselves in the wake of World War I, the force of old myths, the spread of pseudoscientific ideas about race, and the rise of a dictator who would stoke public hatred towards Jews would prove disastrous.

Facing History and Ourselves, “Antisemitism from the Enlightenment to World War I,” video, last updated April 7, 2022.

Explore resources that meet the Massachusetts History and Social Science Framework.
Collection
Save

Explore the origins and history of prejudice and discrimination against Jews with the resources in this collection.
Mini-Lesson
Save

Use this Teaching Idea to introduce students to contemporary examples of Holocaust trivialization and prompt reflection on the question “What are the implications of comparing current events to the Holocaust?”
Collection
Save

Examine how racialized antisemitism has impacted Jews and Jewish communities over the past few centuries with the resources in this collection.
Collection
Save

Help equip students to recognize contemporary manifestations of antisemitism and their origins using these resources.
Collection
Save

Get resources for addressing troubling antisemitic incidents persisting around the world today with your students.
Collection
Save

Help students strengthen their civic voices by exploring examples of individuals who are choosing to participate and make their voices heard in their communities.
Lesson
Save

Students reflect on how they consume and share information they encounter, how antisemitism is spread online and the potential consequences of being exposed to antisemitic content.
Collection
Save

This collection of resources is designed to help educators integrate the study of traditional and contemporary antisemitism into their efforts at combating prejudices and stereotypes in the classroom.
Mini-Lesson
Save

These activities are designed to help students reflect on the devastating attacks in Christchurch, New Zealand.
More Like This Teaching Resources Learning & Events
The resources I’m getting from my colleagues through Facing History have been just invaluable.
— Claudia Bautista, Santa Monica, Calif