In this classroom video, middle school students learn how to participate in a Barometer activity during the first week of school.
Last Updated: December 20, 2018

The Barometer teaching strategy helps students share their opinions by asking them to line up along a continuum based on their position on an issue. It is especially useful when you want to discuss an issue about which students have a wide range of opinions. 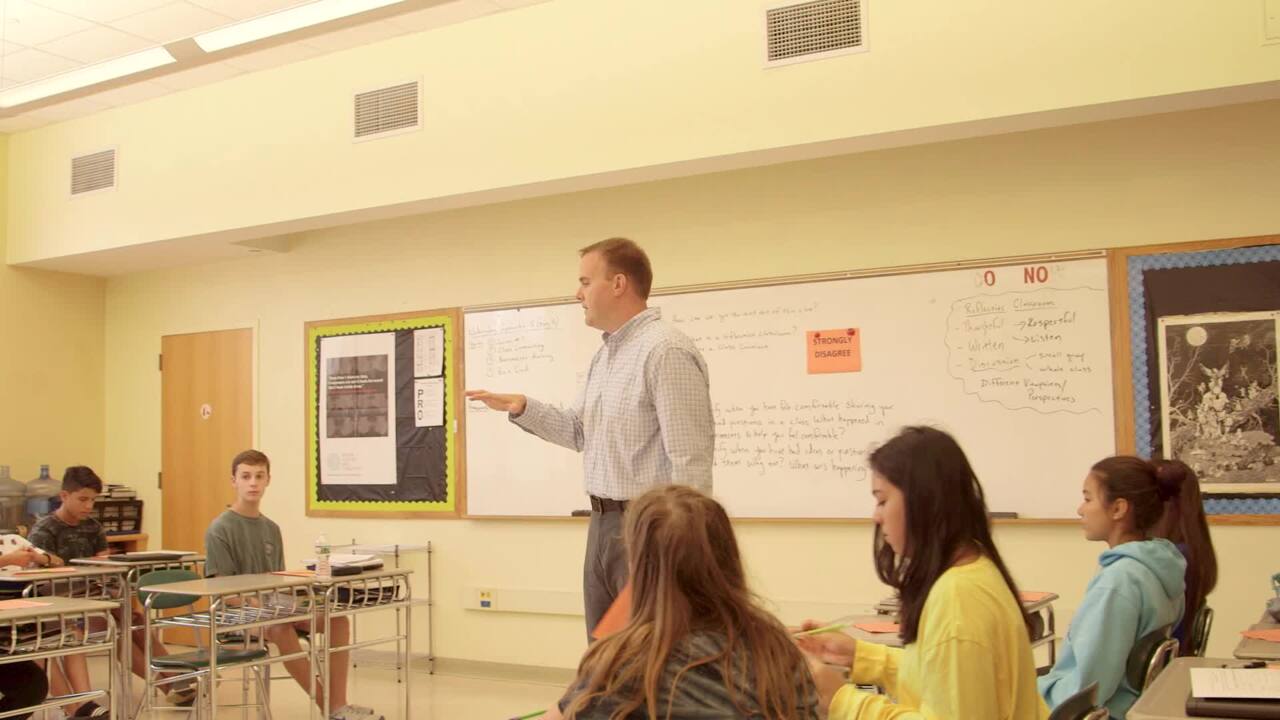 The Barometer activity, it's a way for students, right off the bat, to have them share their opinions. So they'll start by quietly reflecting on a couple of statements. And then the next step is to get up and they're going to take different stands, literally, in the classroom, whether they strongly agree or disagree, or somewhere in the middle. And students hopefully will feel comfortable. They won't all have to share their opinions and/or their rationale, but they'll be able to observe how there is a wide range of opinions in our classroom.

And I'm just getting to know my students here the first week of school. And there's a lot of students who, they don't necessarily know each other very well, but if they can respect the different opinions, hopefully, with this Barometer activity, it'll be a great way to encounter the really serious units that we will see in eighth grade.

Some students will hear each other-- their classmates' opinions and they might realize, I never thought of that side of that argument, or I was just narrow-minded when I was initially reflecting on it. And they're allowed to move. They can change on the continuum whether they-- maybe they strongly disagreed and then they hear something, well, that's kind of altered my thinking. And they maybe don't go from one extreme to the other, but they might kind of move to more of a neutral position, which I think is really helpful for students to realize that they don't have to be locked into opinions. We're human beings, our thoughts change. We listen to each other.

The activity that we're going to start is called a Barometer. Does anyone know what a barometer is or does? A meteorologist, people who study weather, would use it. It measures pressure in the air.

But we're going to be using it to think about, perhaps, when we have strong opinions that could develop-- that could create some pressure in a classroom. And we want people to feel comfortable sharing their opinions, or at least definitely formulating their opinions. So let's take a look.

Today in class, we're performing this Barometer activity where you share your opinions by lining up based on your position on different issues. Again, keep in mind the contract that we've just created.

Once you're done, we'll then get up and move around the room and we'll be able to see where everybody in the class stands on these issues. Any questions?

All right. So the first thing-- read through each statement. Develop your opinion, your level of agreement, and briefly explain why. Again, doesn't have to be complete sentences for that. All right. Get to it.

We'll read through-- hopefully, we'll get through all of them. I'll read the statements and you're going to get up, and if you strongly disagree, you'll stand over here. Try not to stand right next to the board so you don't get your clothes dirty. If you strongly agree, you'll go to this end of the room. But then, as I've noticed, a lot of people are somewhere in the middle, sort of agreeing, sort of disagreeing. And then you guys can stand somewhere in the middle to show that.

And then we'll have an opportunity for a couple of people-- not everyone's going to be able to talk about every single topic. We'll have a few people from each area explain their feelings. And you might realize that, I didn't think of that. That thought didn't cross my mind. And you can change your opinion.

If, for instance, if Kevin's saying-- explaining why he feels this way and it's new to you or you hadn't thought of that, while he's talking, feel free to move if you-- if it's kind of budging your thinking.

Kids should be able to have TVs in their bedrooms. Find where you stand.

It's the fourth one. Kids should be able to have TVs in their bedrooms.

I can see why people would say no, because of the eye thing. But if it's being--

What you mean the eye thing?

But if it's being used appropriately at the right times, I think it should be allowed. And, yeah.

Can kids be trusted to use it appropriately?

I think if they're being watched and told the times that they should-- can and can't be watching.

And the bedroom is supposed to be like a safe place. Like a place where you feel, you know, good, and TV helps with that, I think.

Good point. Somebody I haven't heard from yet.

I'm not fully disagreeing, but because I can see why people would want to have it in their bedrooms for entertainment and for comfort. But also-- it also provides a distraction away from schoolwork and sleep, which can damage your life in a lot of ways, like insomnia and just falling behind in your grades. And it also just affects your health sometimes.

Guys, you did a great job. I didn't hear anyone judging the opinions. We had people on both ends of the spectrum. People seem to be respecting that. And I heard a lot of positive interaction. You know, someone responding, well, I hear that, but I actually disagree, because of this reason. Which that's a great way of having a conversation, and we got to hear many different opinions.

So many students today talked about the importance of feeling comfortable with their opinions. And not just having them, but being able to hear them out loud. And to have people feel safe, it takes work. If we can start the year off on this note, when we get into those difficult texts-- we'll be starting To Kill a Mockingbird pretty soon-- that students don't just feel shut off.

We've all been in that class where one or two students seem to dominate the discussion, and that can shut off people's opinions. You can just-- maybe you can shut down and say, well, I know how he's going to answer it, so I'll just wait to see what he says and maybe I'll just adopt that opinion for myself. And that tendency, that's scary, I think, for me as an educator, because I know how that feels. But in the future, when we're going to be talking about really difficult topics, that more students will feel comfortable sharing them either in small groups or with the whole class.