Benjamin Ferencz: Watcher of the Sky

This film focuses on Benjamin Ferencz, a former prosecutor of the Nuremberg trials who is dedicated to preventing mass atrocities.
Last Updated: April 7, 2022 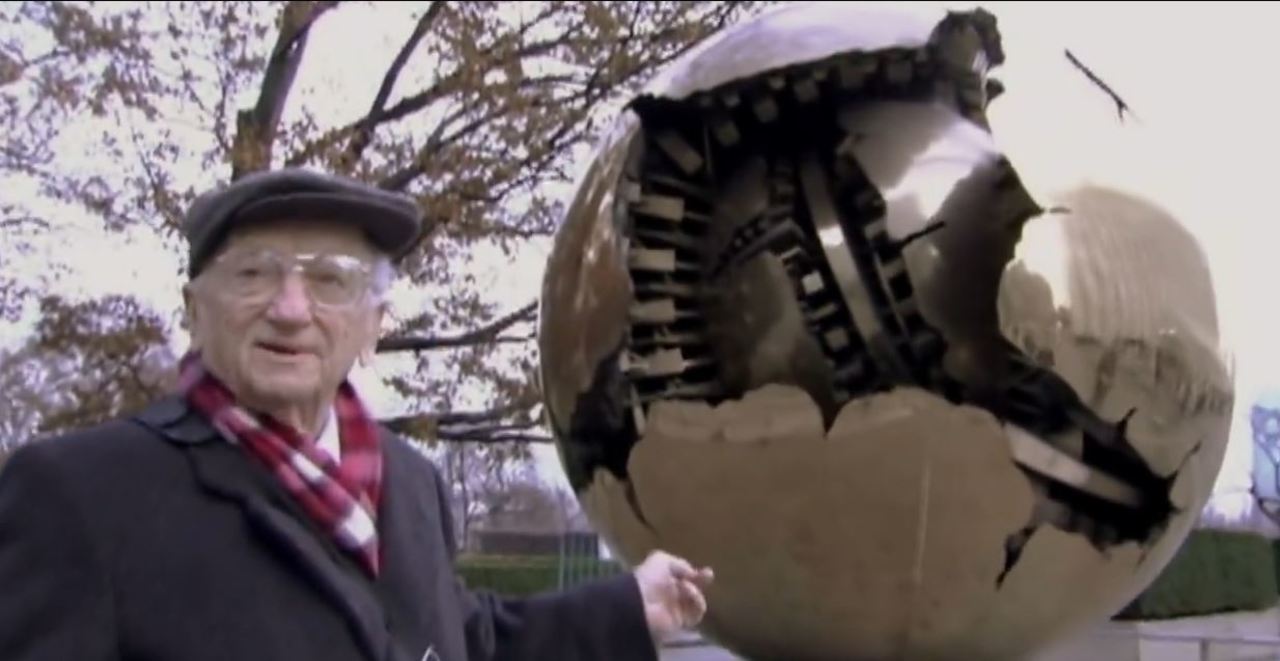 Hm-hm. All right. Come around here. You get the world, see? You can have the world. It's kind of cracked, but that's the condition it's in. We'll have to patch it up a bit to make it work a little better than it is now.

OK, I don't know if you can get in here.

Age of about 50, I set some goals for myself, perhaps a midlife crisis. I said, I'm not going to work for clients. I'm going to try to prevent the next Holocaust. Now, how does one little guy from Transylvania go about trying to reform the world?

Honey will get you more flies than I don't know what-- something else. I have a date with a lady from Greece. Now I have to go find her. OK, I give them kisses and wisdom. They take the kisses. The wisdom, they leave for others.

The only way to stop atrocities is to stop war-making. There has never been and never will be a war without all of the horrors and all the atrocities I have seen in war. So how do you stop it from happening again? I just do the best I can, and I will continue as long as I can. I can't stop.

I've been thinking about criminal responsibility all my life. I was raised in Hell's Kitchen in New York, which was a high density crime area. I had decided early that I wanted to be on the side of the law. I seemed to have certain talents in that direction.

In due course, I won a scholarship to the Harvard Law School. But then it was interrupted by the war.

I think I was probably the worst soldier in the US Army. I was rotten when it came to digging a foxhole. And I was an independent soldier, and I was trained to think. Nevertheless, I fought in every major campaign, from the beaches of Normandy to the final Battle of the Bulge. I saw war firsthand. And my final assignment in the US Army during the war was to go into the concentration camps as they were being liberated and to collect the evidence for war crimes trials.

The US Army knew nothing about crimes against humanity or major war crimes of the type we were encountering. It was a madhouse. I saw the crematoria with the bodies still in them. The troops are coming in, the SS is trying to flee. The inmates are catching the guards. They're beating them to death, burning them alive, heads blown off all along the way. Every conceivable disease-- lice, dysentery, cholera. The object was to get in, get the evidence, and get out and move onto the next camp.

All of that, I have seen. And when the war was over, I had no intention of going back to Germany, never. But since I had experience as a war crimes investigator, I was recruited by the Army. So I became the chief prosecutor for the United States in what was certainly the biggest murder trial in human history.

We ask this court to affirm by international penal action man's right to live in peace and dignity, regardless of his race or creed. The case we present is a plea of humanity to law.

I was 27 years old. It was my first case. I accused 22 defendants of murdering over a million people in cold blood, including women, men, children. This was only a small sampling-- 3,000 men were killing Jews every day for two years, 24 hours a day.

Why did we try only 22? There were only 22 seats in the dock. That's the truth. Nobody had more than 22 seats in any Nuremberg trial. And this was a small sampling of the highest ranking people that I could find, and the best educated. It's a leadership crime. I didn't want to take the enlisted men who were just carrying out orders. These were all doctor degrees, double doctor degrees.

We can't try everybody who is guilty of wrongdoing. All we can do is try to deter the crimes by pointing out how disgraceful it is.

I've just been informed that I've been drafted to say something. I've heard 1,000 times there's no definition of aggression.

The only victor in war is death. So we've got to change the way people think. And that's not an easy thing to. It takes generations. I've been working at it for 60 years.

Good enough for the Tokyo Tribunal and other tribunals, the International Law Commission, and it's suddenly not good enough? You uphold the principle of Nuremberg, which was a tremendous step forward. Do not throw that away, or you're going back to pre-Nuremberg days, and God help you.

Where's my wife? I lost my wife. Gertrude, where are you?

That's my family when we came to America. This is a picture of some refugees.

That was about a year after we got back.

We have the Tycho Brahe.

I wanted them to look at the Tycho Brahe.

The door. It's been there for 30-some years.

Let me tell you a story. Tycho Brahe was an astronomer who felt that he wanted to find out the meaning of the universe. So he persuaded the king in power that he should build him an astronomical laboratory on the island of Hven, and there he built his observatory. And every night, he went out and he viewed the stars and he put them down in a chart. And he had done that for about 25 years.

New king came on the throne. They said, look, we've got something going on there near Elsinore. So the treasury people came out and they said, old man, wake up, wake up, king wants to know what you've been doing here these last 25 years. All he said, I've been watching the skies.

Watching the skies? What for? He said, well, to make a chart. And I have 97 volumes, exact. Each one I have measured myself. And I can tell you the movement of every one of those stars.

Well, what's the use of it? What do you intend to do with that? He said, I hope to live to get 100. 100 volumes of the same thing? What's the utility? What can you do with that? Well, he said, I admit that I was trying to find out the meaning of the universe, and I haven't found it yet. But I believe that someday, somebody will, and I will have saved that person 25 years of labor. And when the American astronauts landed on the moon, they had with them the tables of Tycho.

So there it is. It's an inspirational story, the watcher of the sky. I am watching the sky. That's it.

After learning about the Armenian Genocide, students reflect on the writing prompt a second time by adding a historical lense.
Assessment
Add to Collection

Adding to Evidence Logs, 1 of 4

Students incorporate new evidence from the history of the Weimar era into the position they are developing.
Assessment
Add to Collection

Adding to Evidence Logs, 2 of 4

Students consider how what they've learned about the rise of the Nazi Party influences their thinking about the essay prompt and practice making inferences.
Assessment
Add to Collection

Adding to Evidence Logs, 3 of 4

Students review the documents and videos from previous lessons and consider what information supports, expands, or challenges their thinking about the essay.
Assessment
Add to Collection

Students reflect on, gather evidence for, and discuss the unit writing prompt in its entirety.
Assessment
Add to Collection

Students reflect on the unit as a whole and begin to write a strong thesis statement for their essay.
Collection
Add to Collection

Explore resources that meet the Massachusetts History and Social Science Framework.
More Like This Teaching Resources Learning & Events
The resources I’m getting from my colleagues through Facing History have been just invaluable.
— Claudia Bautista, Santa Monica, Calif