Bishop von Galen and the War against the Disabled 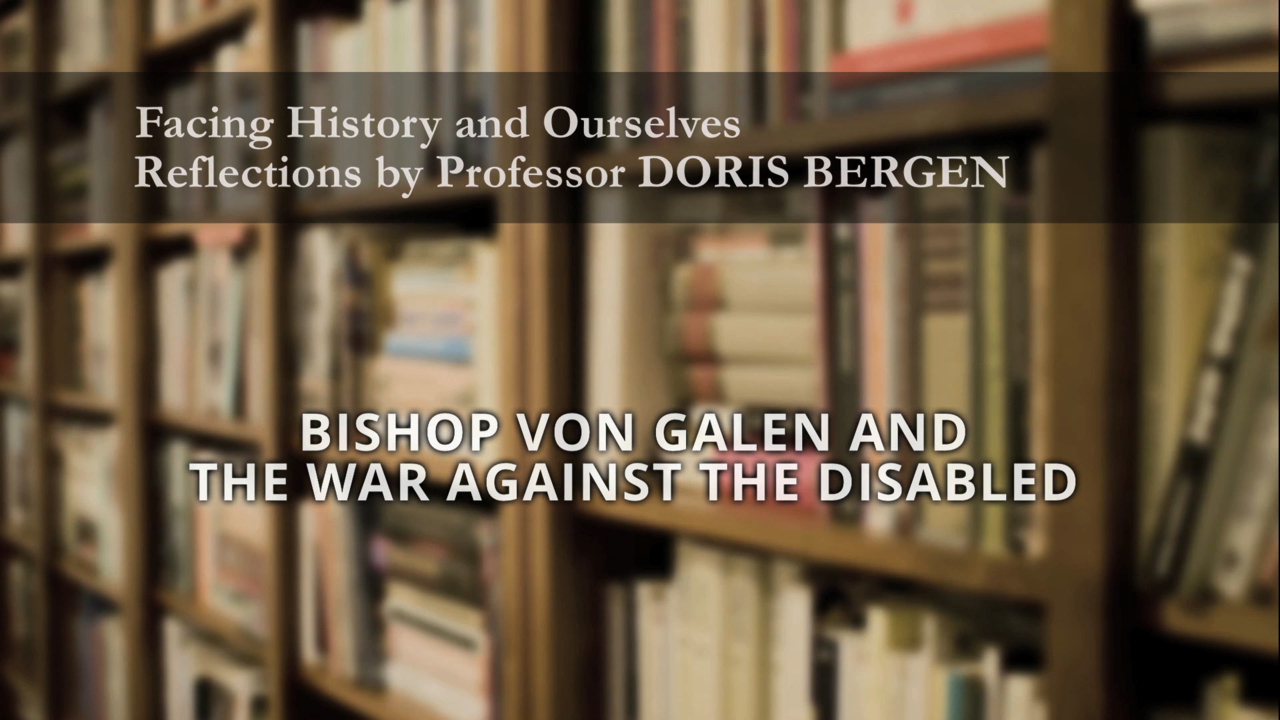 From 1939 to 1941, 70,000 Germans with mental or physical disabilities were murdered by the Nazis. The executions were part of a secret euthanasia program called T4 that was designed to weed out unwanted biological characteristics. The goal was to create a master race of perfect people.

In 1941, upon learning of the euthanasia program, Clemens August Graf von Galen, bishop of Münster, spoke out.

Bishop von Galen, later became archbishop and later a cardinal, was a Roman Catholic churchman from Germany who, when he initially became a bishop, was actually known for being quite sympathetic to Nazism. But with the so-called euthanasia program, murder of disabled people, von Galen increasingly became distressed.

And he began to gather information and others helped him to give a series of sermons in which he denounced the killing of people as handicapped.

According to Catholic doctrine, there are doubtless commandments which are not binding when obedience to them requires too great a sacrifice. But there are sacred obligations of conscience from which no one can release us and which we must fulfill even at the price of death itself. At no time and under no circumstances whatsoever may a man, except in war and in lawful defense, take the life of an innocent person.

He gave specific examples. One of the sermons he said, I know a man from our parish an elderly man, he is no longer in the kind of health he once was, but he served this country loyally in the last war and now he's in an institution. His son is fighting in the German army on the Eastern Front. What will the son say when he learns that his father has been deemed unworthy of life? So it's not only making the moral claim that this is wrong, although he'd make that claim too, it's also making the practical claim that, wait a second, if you begin to define lives as worthy of living only if they contribute to the common good, whatever that might be, who gets to decide what that common good is?

And what's that going to mean for morale in a country where you're at war and you depend on soldiers and their families to support that war effort? Hitler believed Germany lost the First World War because of the home front and the collapse of morale and so on. Bishop von Galen he was very, very clever in the way he pitched the argument. So he gave that argument about the effect this would have on the military and he also said that what will happen to soldiers who themselves become injured, become damaged, physically or mentally? Will they, too, be thrown away like an old machine or like a cow?

He didn't mention the killing of Jews. He didn't talk much about sort of racial notions. What he talked about was murder. And a murder that he presented in such a way that everyone listening could think, that could be me. They were important not only because they were spoken in public, but because they were printed and distributed quite widely inside Germany and also outside. And you can see the importance of that because being a Roman Catholic bishop he had connections with right Catholic circles elsewhere.

And of course, Hitler was furious. Goebbels, minister of propaganda, they were furious about these sermons, at the public nature of them. Although initially they said, we have to punish him, get rid of him, they realized he was very popular. He had a big following in his own community and he had international connections but especially inside Germany in wartime it was too risky to take a popular church leader make like a clash with the Catholic Church. Remember, 40% of Germany's population was Catholic. Hitler himself was a Catholic.

It was not worth it. So von Galen was allowed to remain in his post. He wasn't really punished. The program did change, became less open, more efforts to conceal, but also the targets of the program changed. Increasingly it was not institutionalized Germans and children who were targeted but rather concentration camp workers who were no longer able to perform labor, so that T4 program became more about disposing of unwanted people, rather than people whose relatives, family, community members might be there to speak out on their behalf.

Facing History and Ourselves, “Bishop von Galen and the War against the Disabled,” video, last updated April 7, 2022.