Choosing Cruelty: The Psychology of Perpetrators 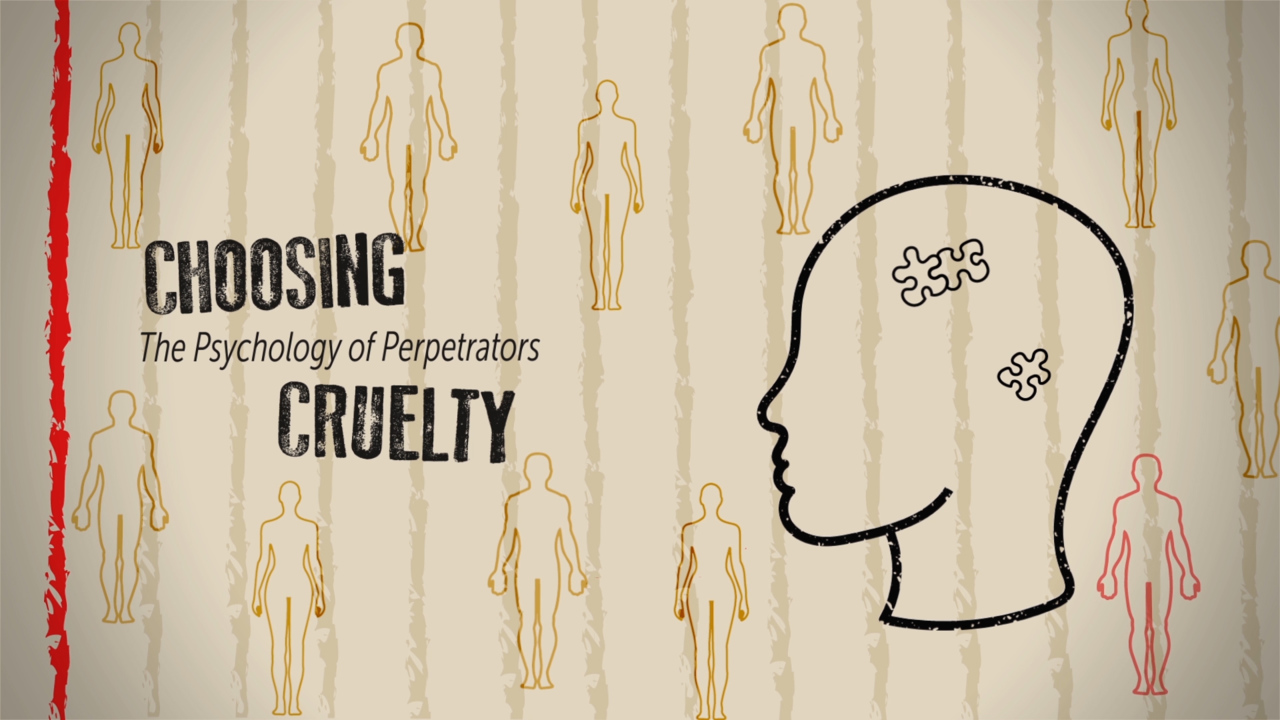 I think in perpetrator behavior what's perhaps the most intriguing piece ever, for me, is the first time they kill, because they do have these moral moments. Some people have talked about them almost like a staircase, that you start here, and if killing is up here, no one ever just jumps right to the killing. But there are steps you take along the way. And each step is kind of a moral moment. There's the dilemma of some type, of do I stay here? Do I take another step? Do I try to go back down the staircase?

There's this process, I think, of brutalization. And I think one of the key points in it is the first time a perpetrator chooses to kill. I remember one perpetrator in Rwanda saying to me, I knew at this point if I swung the machete, there was no turning back. And he had taken a lot of steps to that point. But now if he swung, now if he killed, it was as if this was the threshold, after this, that there's no turning back from.

And what I typically ask people to do is think about the group dynamics that influence their behavior. In their classrooms, in groups they're a part of, athletic teams or whatever, what are those group dynamics that impact your behavior as an individual? Where do you feel pressures of conformity, of peer pressure? Where do you feel that need to be good at what you do, to be a group leader, to be creative, to be insightful, to be productive, to be efficient?

I've been working on perpetrator behavior for close to 20 years. The biggest puzzle for me had always been the creativity piece, the brutality with zest, murderers in Rwanda who take great creativity in how cruelly they can torture someone or how quickly they can kill someone, with one machete stroke or two, and who begin to keep count of how quickly and how many we can kill. And I think I always struggled with that sense of, are these the people-- is this the extreme that comes in the perpetrator behavior, that they were sadistic to start with, they were pathological start with, and this is just a chance to express that?

But I think you see it too often to just default to that explanation. And for me, I began to look at it from the viewpoint of, again, trying to step into the shoes of someone who's perpetrating this evil. When killing has become easy-- and I don't think the first one is ever easy. But as it becomes progressively more easy, and you become recognized for what you're doing, and you become respected for what you're doing as a killer within this group that has a very different moral universe than most other groups, I think the cruelty and the creativity and the brutality and the zest of it that we see is more a reflection of recognizing ways to step up group ladders, that within this group, this behavior is prized. This is seen as creative. And within the very unusual dynamics, moral world of this perpetrator group, this is actually something that's respected. It's actually something that's valued.

I think we realize that, in any given situation, all of us have a range of choices open to us. Now, the situation-- I think how it works is it can restrict some of those choices, but the choices are still there. So I think sometimes when I study perpetrator behavior, people will worry a little bit about studying it because they think, well, if we can explain perpetrator behavior, then we've excused it. We haven't excused it. Maybe I have this range of choice to me right now, and maybe a perpetrator in a genocidal society has this range of choice, but he or she still has choices within that. And they still, at the end of the day, choose to commit atrocities.

I think it's been said that for every complex problem there's a simple solution, and it's always wrong. There's no simple solution for this one. And I think what we need to understand is, what are all the tiny pieces that come together to-- all the factors that come together to help us understand how perpetrators do this evil? Jean Hatzfeld, a French journalist who interviewed a Rwandan perpetrator-- and in one of the interviews, the perpetrator said to him, at the time of those killings, I didn't even notice the tiny things that were transforming me or making me into a killer.

So I want to understand what those tiny things are. And I've wanted to look at them, really, in three different sections. One is, what's the cultural construction of world view? What are the cultures in which perpetrators are raised that we need to understand? Secondly, how do perpetrators come to define the other? What's the psychology behind the us-them thinking and blaming the victim, where the other can become so dehumanized, are demonized to such an extent, that it's the morally justified thing to do to exterminate them?

And then thirdly, I've wanted to look at the social constructions of the groups where perpetrators do the work they do, the work of killing. What are the group dynamics that are at play there? And I think if we can tie together those three pieces, the culture, the view of the other, and then the group dynamics of where killing takes place, we can start to come to a more multifaceted understanding of how perpetrators do this work.

Credit:
Facing History and Ourselves
Using the strategies from Facing History is almost like an awakening.
— Claudia Bautista, Santa Monica, Calif