Conventional Revolution: Raphael Lemkin and the Crime Without a Name 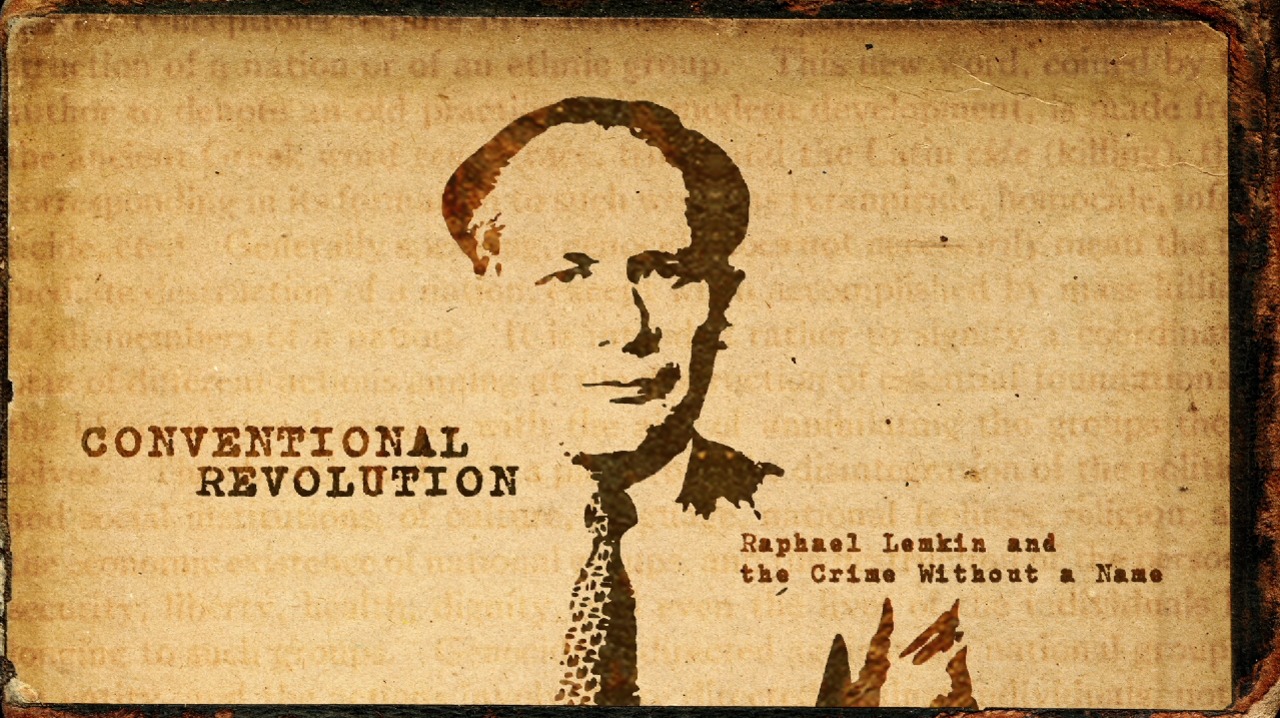 A genocide is a new word combining the Greek word genos, meaning race or group, with the root of the Latin cidere, meaning to kill. Dr. Raphael Lemkin, who is a professor of law at Yale University and specializing in teaching matters about the United Nations. Dr. Lemkin is the man who created the word genocide. Dr. Lemkin, could you give us a little background on how you came to be interested in this genocide?

Became interested in genocide because it happened so many times. It happened to the Armenians, and after Armenians, Hitler took action.

Raphael Lemkin was born in 1900 in Eastern Poland in a shtetl, which is a small Jewish village. He was fascinated by why people would destroy another group of people from a very young age. And then, in around 1915, the Germans swept through his hometown, in Wołłkowysk. But the event that actually made him who he was was the Armenian Genocide of 1915.

Raphael Lemkin began reflecting on the mass murder of Armenians by the Turkish government in the Ottoman Empire when one of its surviving victims took justice into his own hands.

On an evening in 1921, Soghomon Tehlirian, a young Armenian who had seen his family murdered by Turkish soldiers in 1915, shot and killed Mehmet Talaat, the former Ottoman minister of the interior, on the streets of Berlin. Tehlirian's murder trial revealed to the world the horrifying actions the Turkish government had taken against the Armenians. Evidence exposed that in 1915, Talaat, known during World War I as the "Big Boss," had overseen the systematic killing of nearly 1 million Armenians, most of which were unarmed civilians. Lemkin, who had just begun studying linguistics at the University of Lviv, was outraged when he learned that there were no laws the international community could use to prosecute a man like Talaat. Why, he wondered, was killing a million people a less serious crime than killing a single individual?

So, Lemkin immediately changed his doctoral thesis and discipline from linguistics to law. And then in 1933, which was the year that Hitler came to power, here's Lemkin, a Jew in Warsaw, finds out that there is a meeting of the League of Nations in Madrid. Lemkin proposes to this Madrid Conference, the League of Nations, acts of barbarity, and acts of vandalism. And acts of barbarity are acts against the physical nature of groups. And acts vandalism are acts against cultural aspects of a group.

Lemkin's ambitious proposal was largely ignored at the Madrid Conference. Some delegates even went so far as to say that the crimes he described happened too seldom to legislate.

The Siege of Warsaw. The big attack begins 31 miles outside the capital. Shells are dropped into Warsaw without let up, as day by day the Nazis forge a tighter ring of steel around the almost helpless city.

Germany invaded Poland in September, 1939. Lemkin attempted to flee Warsaw by train, but was forced to take refuge in the woods when German bombers destroyed it, killing hundreds. He finds his way to his parents' home in Eastern Poland. And, according to his autobiography, he knows it's going to be the last time that he sees them. He spends two days with them. His parents refused to go with him, they said we're old, the Germans aren't going to touch us, we're old people, we're farmers, nothing is going to happen. But according to his autobiography, Lemkin feels that he does know what's going to happen. He tells an old Jewish religious baker that this is not war, it's something different. Hitler is going to be doing something different. He says to the baker, have you read Mein Kampf? And the baker says no, I've never heard of it. And Lemkin says, in it Hitler says that he's going to kill the Jews like rats. It's not war, it's something different.

Lemkin immigrated to the United States in spring, 1941. He had been hired to teach international law at Duke University, but his thoughts were consumed by the destruction happening in Europe. And then, in June 1941, he receives a letter from his parents that is written on a torn piece of paper, it's two or three lines. And it says something like: We're well, we're happy, we hope this finds you in America. And he realizes from this torn, ragged piece of paper, that his parents are living in poverty. And he later finds out that his parents were gassed in Treblinka.

Lemkin had lost his home and most of his family to the very crime he had been trying to prevent since the 1920s. Yet, even at the end of World War II, it remained a crime without a name. Axis Rule in Occupied Europe, his monumental book published in 1944, would change that forever. While the book's goal was to describe how the Nazis used law to legitimize their war-making, a small section about the definition of their crimes would make the largest historical impact. In this section, Lemkin coined the term genocide.

So genocide is a hybrid word. Genos, is from the Greek. It means race, or tribe or group. And cidere, or cide, is from the Latin, and it means to kill, but more specifically, to destroy. So, it's about the large destruction of groups.

Lemkin's new word was about more than mass murder. It didn't need to involve weapons, or result in the destruction of a nation. Nor was it defined by the number of people killed or injured. It described the intention to destroy, physically or culturally, the security, dignity, or the lives of individuals solely because of their membership to a group. In 1945, when the allies liberated concentration camps all over Europe, they gathered evidence of a genocide larger than any other in history. And for the first time in history, there was a word in the dictionary to name the crime. Lemkin hoped that the ensuing international military tribunal, known as the Nuremberg Trials, would be the place where genocide would be legally defined and that it would be used to give justice to its victims.

He attended the planning for the trials in London with no official affiliation, but was so persistent in pushing his message that he was able to get the word into the indictment against Nazi leaders. While the prosecution used the term, Lemkin felt it was never clearly defined. Moreover, he was disappointed that the prosecution only charged Nazis with crimes committed during wartime in other countries. By his definition, the Nazis should have also been charged for discrimination against Jews that had taken place within Germany.

So, Lemkin felt that he had to do something about this. The newly formed United Nations was meeting in New York, and he got a resolution together that put genocide on the agenda of the United Nations. He had to have support from three nation states, which he finally got. And it was a long process for him to do this. He had to explain what genocide was, and he came armed with his Axis Rule in Occupied Europe, and gave out copies of this book to explain to people what it was. And the world was willing to listen. People were shocked-- people were shocked by the Holocaust. The truth came out afterwards about what happened, and people wanted to do something.

Panama, India, and Cuba were the first to endorse Lemkin's proposal. And on December 11, 1946, the General Assembly agreed that genocide was an international crime for which a treaty should be created.

He had the support of so many diplomats and delegates who really believed in this Convention as much as he did. Church groups, all religious organizations, women's organizations. And, as he says in the autobiography, the press were absolutely behind him. Because the press didn't see the legal and political implications of this, they just saw it as a morally right thing to do. Of course we have to stop mass destruction of individuals. And Lemkin says there was a golden age of human rights was there in the United Nations. It was over by 1948. That's when the Cold War kind of crept in, but Lemkin capitalized on this golden age, between 1946 and 1948.

After a lifetime of work, and two more years of lobbying delegates, Lemkin saw the General Assembly unanimously vote to adopt the Genocide Convention on December 9, 1948.

I would urge-- and I think that's the spirit-- the unanimous view of the Assembly, that this Convention be signed by all states, ratified by all parliaments at the earliest date. In order that basic human rights be given the protection of international law for the sake of progress, social, and international peace.

The convention defined genocide as an international crime condemned by the civilized world which could occur in times of peace or in war. It criminalized all acts committed with the attempt to destroy, in whole, or in part, members of a specific group. It charged that those accused of genocide could be prosecuted everywhere, regardless of the country where their crimes were committed. Sadly, the Cold War set in soon after its ratification in 1951, and for decades, the Genocide Convention was largely forgotten. Lemkin continued to lobby countries to ratify throughout the 1950s, but he passed away in 1959.

Lemkin saw the Genocide Convention as-- its moral weight was just as important as its legal weight. And he knew this because he knew that genocides were going to occur in the future.

In his lifetime, Lemkin was referred to as an insistent prophet. And the title has proven accurate in the years since his death. Genocides do continue to occur, but the use of the word in academic and legal work also continues to rise, and so too do ratifications of the Genocide Convention by individual states. In 1998, the International Criminal Court officially convicted a perpetrator of genocide for the first time, proof that signing the convention is more than a theoretical commitment.

Though there is still work to be done, humanity's ever-increasing awareness about genocide affirms that Lemkin's vision of a more peaceable world, and the sacrifices he made towards that goal, were not forgotten. Rather, he took the first step of a long journey that continues to this day.

Explore the digital version of our core resource on the Holocaust to find classroom-ready readings, primary sources, and short documentary films that support a study of the Holocaust through the lens of human behavior.
Collection
Add to Collection

Explore the stories of Jewish partisans that stood against Nazi oppression, genocide, and antisemitism during World War II.
Chapter
Add to Collection