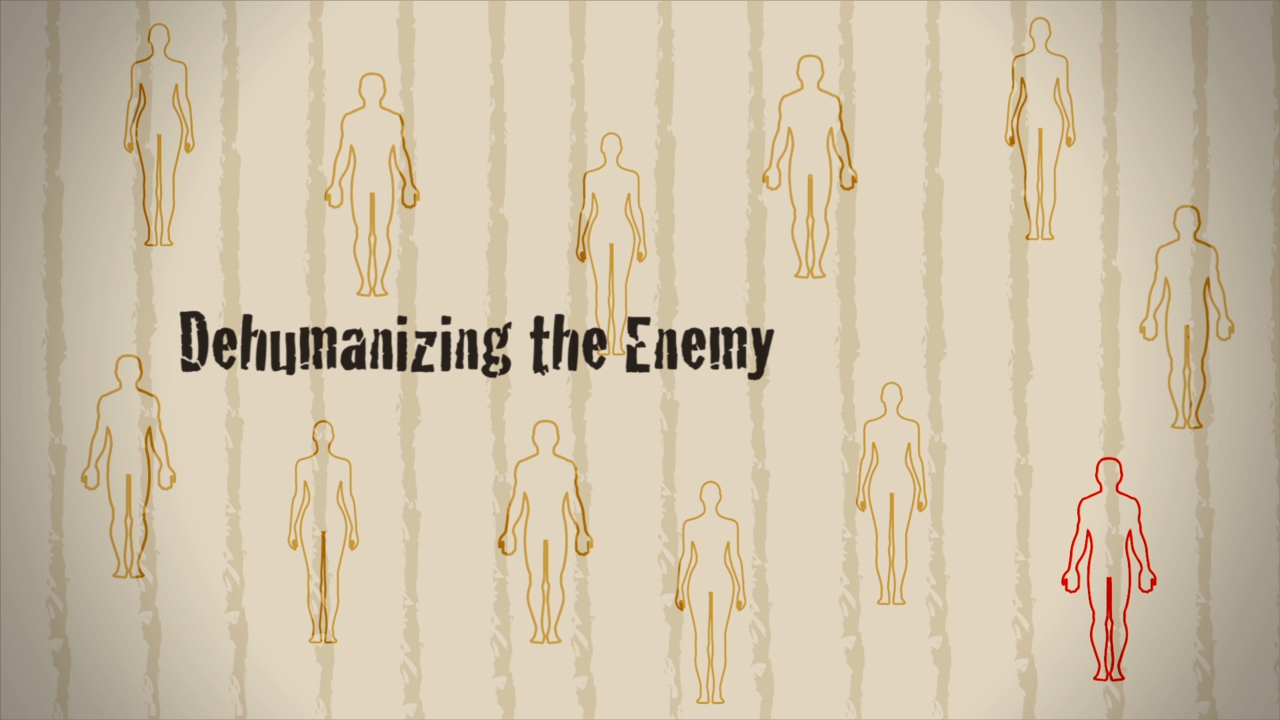 I think in Rwanda, someone I know there who grew up Hutu-- and who every night when he was growing up in the 60s and 70s, before he went to bed, his mother made him look underneath his bed and in their cellar to make sure there were no Tutsis hiding to come kill them.

When a young boy who grows up every night having to look under his bed and in his cellar for the enemy, because they're that much of a threat-- it's not much of a surprise that when he is given permission to kill, to take on this enemy that he's seen as at threat for so long-- and you don't have to go far in convincing him that this is a reality that it's not just OK to kill them. If you don't kill them, you're putting yourself and your family's lives at risk because of that.

And his response was very simple, because it made it easier for my men to do what they had to do. The less human you were in their eyes, the easier it was for them to perpetrate the atrocities.

I think we see this in cases of genocide where perpetrators do everything they can to strip victims of humanity. They shave their heads. They force them to live in filth and excrement. They dress them the same way. They take away names and replace them with numbers. They refer to them as everything, in terms of derogatory terms or categories, as everything but human.

And again, I think for perpetrators, what that does is it makes the difficulty they would have of killing someone face to face, equally human-- it removes that obstacle, because these people aren't human. They're less than human.

Maybe even when they become demonic, I mean, that's the worst case. They're not only subhuman, but they're actually outside of humanity, they're demonic. Those things make the moral justification, I think, much easier for perpetrators.

We see it in, again, how victims are described. We see it in how their destruction is described. Raul Hilberg, really the founding figure of Holocaust studies, has read I think more documents from the Holocaust than any scholar dead or alive. But Hilberg once said he had read hundreds and thousands of pages of Nazi documentation before he found the word killing.

And he finally found the word killing in reference to an edict about how the Nazis were to put down their dogs. And that's the first time he found the word killing, even though by that point the Nazis had killed millions of people. But it was all the euphemistic language: a final solution of liquidation, of clearing, of disposal. All the things that described it, except the very thing it was, killing. But I think all of that's part of that distancing piece that dehumanization does for us. It places someone at such a distance from us, that really there aren't any moral qualms left about their destruction.

I think one of the things we see in Reserve Police Battalion 101 and the Einsatzgruppen killings, and we see in Rwanda, is what frustrated the killers was when victims refuse to turn away from them. They looked at them face to face, eye to eye, and it would send killers over the edge for some of them just look at them that way.

In Rwanda, I've interviewed perpetrators who spoke of this repeatedly. That when the victims looked at them, they felt it was an affront almost for the victim to look at them, because that made it too intimate. So part of what we see in genocidal destruction are a wide variety of techniques of this type of distancing.