Dr. Paul Bookbinder discusses the roles of bystanders and resisters during the Holocaust.
Last Updated: April 11, 2022 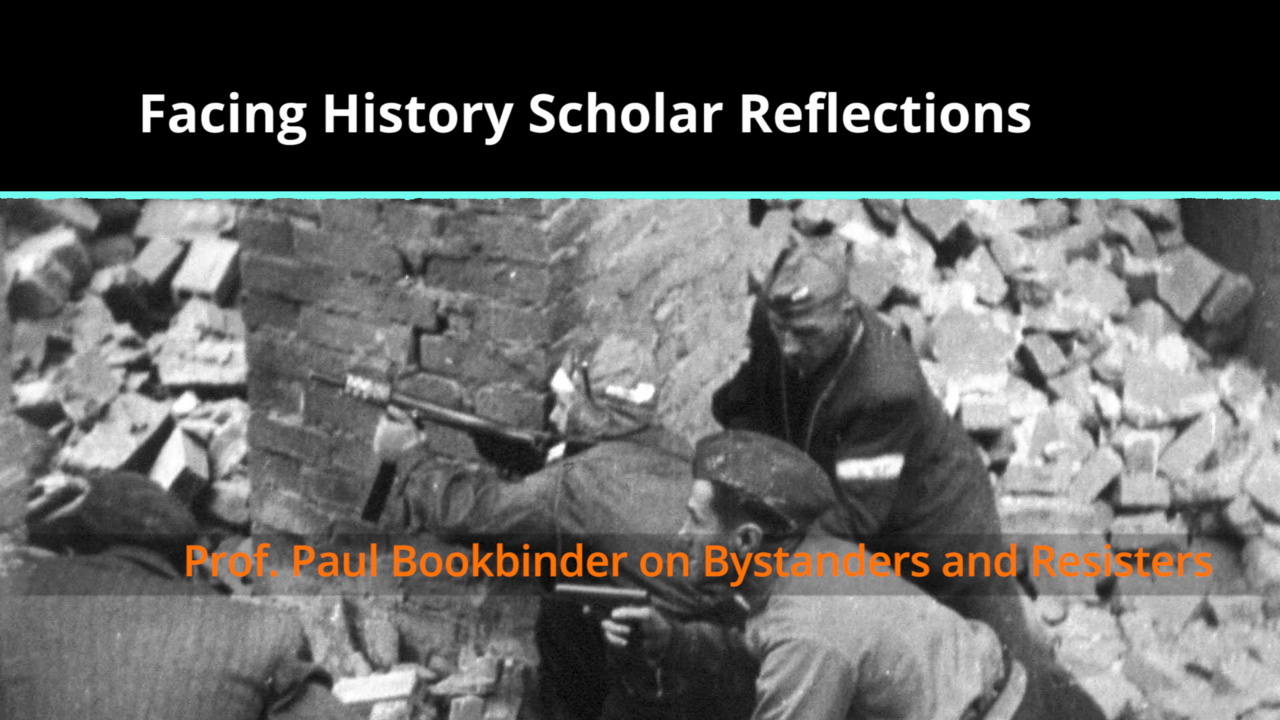 I'm Paul Bookbinder, Professor of History at the University of Massachusetts Boston. While we very much want to know what motivated perpetrators-- those who carried out the mass murders-- we're also interested in those who were characterized as bystanders and those who actually resisted. It of course raises the question of what did people know? And here, there certainly was a range of knowledge.

One of the things we now realize is that within Germany the concentration camps were no secret. Once the mass murders started, evidence of those murders did trickle back to Germans and were available in other parts of Europe as well. Clearly some knew more than others. What more people would realize was the fact that Jews were being rounded up and were being moved from their own towns, cities, and the countries both in Western and Eastern Europe to camps. And here, many people just ignored the situation.

But what we do realize is that sometimes resistance could be as seemingly insignificant as not questioning new people who came into your area. Not asking where they came from. Why they were here. What their identity was. Some people were willing to actually get involved in dramatic resistance. And that would vary from the French citizens of Le Chambon, who hid Jews to save them. To people in the Netherlands who were involved in hiding children. And even people like Marion Pritchard, who were willing to use violence when necessary to save their fellow Jews.

Others included the American Varian Fry, who helped Germans and others elude the Nazis and aided many of them in leaving Europe and many who were able to come to the United States.

One of the most significant debates about which category people could be classified in has to do with those who were members of the Protestant and Catholic clergy. In many areas of occupied Europe, churchmen collaborated actively with puppet regimes and those of Nazi occupation. While in other cases, individual churchmen and women hid Jews and were responsible for saving their lives.

Considerable attention has been focused on the Vatican and the role of the Pope. Pope Pius XII, who had been Cardinal Eugenio Pacelli, has been maligned for not doing what he might have as the moral voice of a billion people, while others have defended him and argued that he tried quite hard to do what was possible under the circumstances of the war.

One of the continuing debates about Allied policy during World War II concerning the Holocaust is the decision not to bomb the crematoria at Auschwitz-Birkenau. The defense of that decision rests on the military capability to do so, and it's centrality to the war effort. The criticism centers on the fact that it probably was possible. And had it been carried out, it might indeed have saved many lives.

By the spring of 1945, Germany's defeat loomed. Adolf Hitler committed suicide in his bunker outside of Berlin. His hope was that all of Germany would go up in flame, because he felt betrayed by the German people. While there was tremendous destruction, his final orders were often not carried out and many Germans survived because of that.

The Roots and Impact of Antisemitism (UK)

Students explore the long history of discrimination against Jews and come to understand how anti-Judaism was transformed into antisemitism in the nineteenth century.
Collection
Add to Collection

Students analyze images and film that convey the richness of Jewish life across Europe at the time of the Nazis’ ascension to power.
More Like This Teaching Resources Learning & Events
Most teachers are willing to tackle the difficult topics, but we need the tools.
— Gabriela Calderon-Espinal, Bay Shore, NY