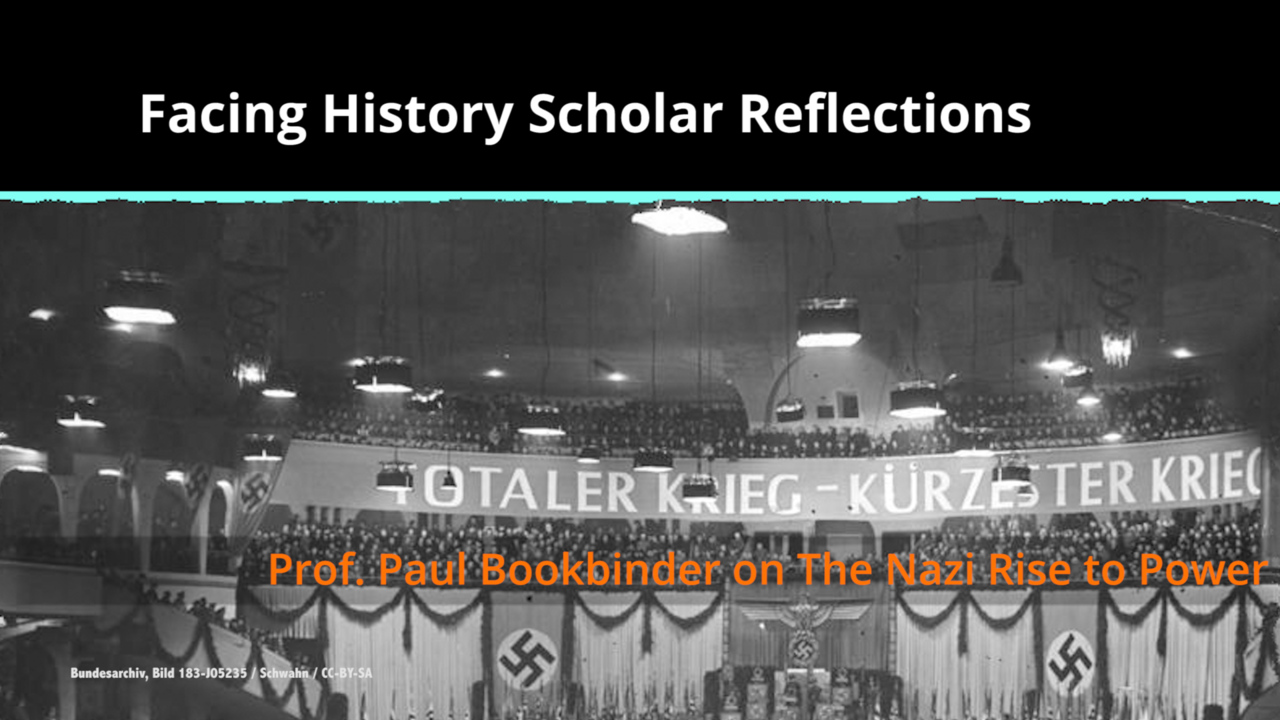 I'm Paul Bookbinder, Professor of History at the University of Massachusetts Boston. By late 1932 and early 1933, the Nazi Party was the largest political party in Germany and Adolph Hitler was its most popular political leader. That led the president to appoint Hitler as chancellor in on January of 1933 and gave him an opportunity to make Germany in his image.

Within a month of the time that he became chancellor, the Reichstag, the German legislative building, went up in flame and that was a signal which most Germans didn't read-- that German democracy was on fire and the Republican values that had characterized the Weimar Republic were no more. Within another month, Hitler would have emergency powers and Germany would have its first concentration camp.

He would also show himself effective at dealing with the enormous unemployment and the effects of the world depression. A combination of huge public works building and armaments production would put millions of Germans back to work, give them money, and improve the economy. At the same time, he was reorganizing the police forces and would harass and arrest those who were considered opponents.

The war against the Jews had really begun in earnest in 1933 with the Civil Service Reform Act. That was the first time that Jews had been actually identified in German law since much earlier periods in German history. And the debate began about who was a Jew. Did you have to belong to the Jewish community? Did you have to have parents who were Jewish? What about Jewish grandparents? This was part of a policy of isolating, alienating Jews, restricting their educational and occupational activities, and slowly making life for them much more perilous and much more difficult.

With the writing and publication of the Nuremberg laws-- these laws which made intermarriage between Jews and non-Jews, and sexual relations between Jews and non-Jews against the law-- it was becoming more and more clear that the Jews had, at best, a restricted, if any, place in the future of Germany. About a third of them left Germany in the months after Hitler took power. They were part of an exodus which included numbers of non-Jews who no longer wanted to live in a Germany dominated by Nazis and by Adolph Hitler. And they constituted some of Germany's most creative people: artists, scientists, filmmakers, university professors, and others.

In June of 1934, Adolph Hitler ordered what became known as the Night of the Long Knives. During that night, several hundred people were murdered. Among them were some who seemed to represent the most radical part of the Nazi movement. But also included in that were old political opponents of Hitler and even two generals, Catholic politicians, labor leaders, and some of the last Democratic figures left in Germany.

The last obstacle to Adolph Hitler's complete power in Germany was the aged president, General von Hindenburg. His death, in the summer of 1935, removed this last obstacle and Adolph Hitler was able to consolidate those remaining powers of the presidency with his, as German chancellor, to make him the absolute ruler of Germany.

Responding to the Synagogue Attack in Colleyville, Texas: For Jewish Educational Settings

This Teaching Idea is designed to help guide an initial class discussion on the hostage situation at Congregation Beth Israel of Colleyville, Texas.
Mini-Lesson
Add to Collection

Responding to the Synagogue Attack in Colleyville, Texas

This Teaching Idea is designed to help guide an initial class discussion on the hostage situation at Congregation Beth Israel of Colleyville, Texas.
Collection
Add to Collection

Help equip students to recognize contemporary manifestations of antisemitism and their origins using these resources.
Collection
Add to Collection

This collection of resources is designed to help educators integrate the study of traditional and contemporary antisemitism into their efforts at combating prejudices and stereotypes in the classroom.
Collection
Add to Collection

Help students strengthen their civic voices by exploring examples of individuals who are choosing to participate and make their voices heard in their communities.
More Like This Teaching Resources Learning & Events
The resources I’m getting from my colleagues through Facing History have been just invaluable.
— Claudia Bautista, Santa Monica, Calif