Giles Hodges describes the riot that erupted in 1933 Toronto when a group of Nazi-inspired men raised a swastika flag at a local baseball game.
Last Updated: April 12, 2022 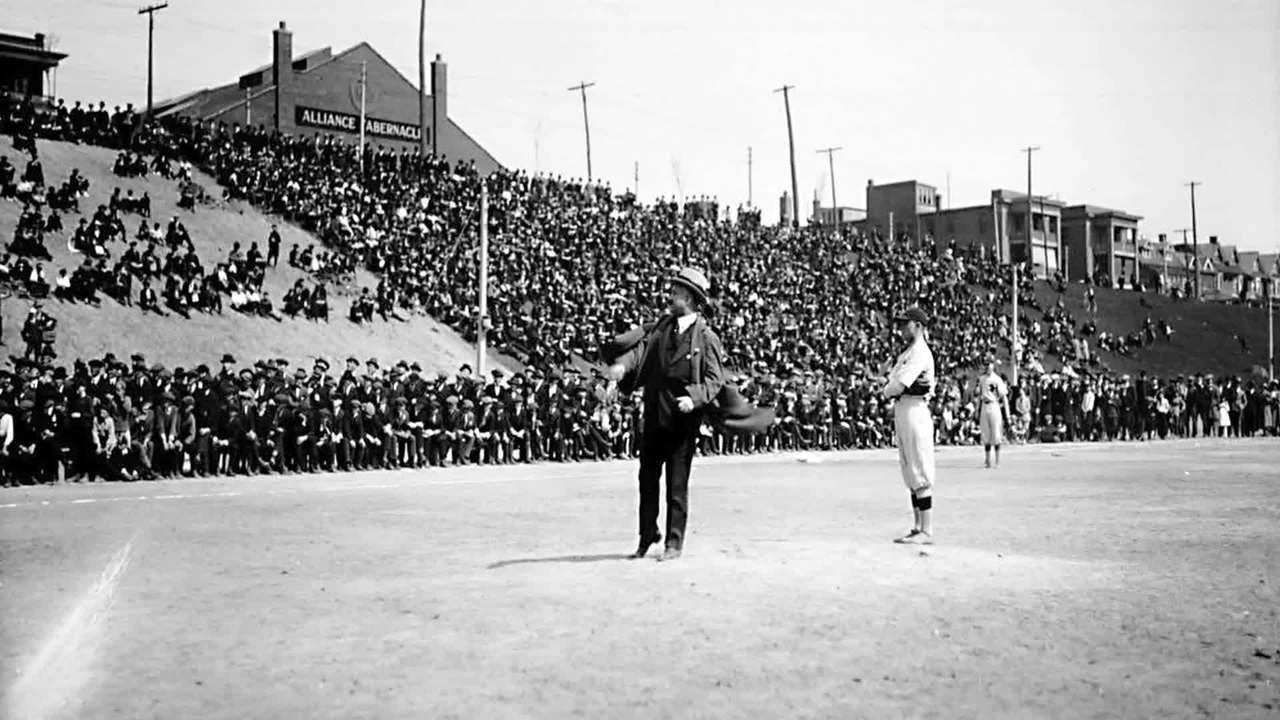 GILES HODGE: The common sense about history is that history is the story of great men and sometimes women doing great deeds. History is presented as a chronicle of the amazing things these famous people did.

But history is really not about that. I'm Giles Hodge. The thing that really turns me on about history, the thing that makes me a history geek is that to me, history seems to be made by the countless decisions and small actions of literally millions and millions of people, ordinary people just like you and me in ordinary places just like this. Let me give you an example.

One hot night, August 16, 1933, 16-year-old lacrosse player Joe Goldstein leaves his home at 1A Bellwoods Avenue, Toronto, heading north to Willowvale Park to watch a baseball game. That seemingly innocent decision by one largely unknown young man was to have profound consequences. Goldstein's presence at the game that evening helped catalyze the biggest riot that Toronto has ever seen. It drew an embattled community together, captured the imagination of the entire city, and help pave the way for the multicultural city of Toronto that we know today. And it all happened right here.

Try to imagine this place as it was in 1933 on a hot night in August in the middle of a heatwave. Which I know is really hard right now because it's so cold and snowy, so I've brought you some pictures.

This park, then called Willowvale Park, was the site of many a baseball game. So what was so special about this particular game, a junior softball game between teams representing St. Peters Church and Harbord Playground? Why did young Joe feel he absolutely had to be there? Let's go take a look at the records to find out.

Census records of the City of Toronto Archives can tell us a great deal. The population of Toronto in the 1930s was overwhelmingly British. Over 2/3 of Torontonians were either born in Britain or directly descended from those who were.

Toronto the Good was largely Anglo-Saxon and Protestant. The single largest minority group were Jews. There were also identifiable communities of Italians, Polish, Ukrainians, and Chinese. These immigrant communities were largely poor and working class, and were concentrated in the downtown neighborhoods south of Bloor Street.

Bloor Street was a sort of Rubicon, with Anglo-Saxon Protestants living to the north, non-Protestant immigrants and the poor living to the south. Elements of the Anglo-Saxon majority were made very nervous by the presence of anyone they considered outsiders, people not like themselves. Signs like this were not uncommon in certain parts of the city.

What does this all have to do with baseball? Well, the members of the St. Peters team were all Christian, while those representing Harbord Playground were predominantly Jewish.

Was there any particular event in the days before this game that helped contribute to why Joe felt he absolutely had to be there? The Toronto Reference Library here in the center of Toronto holds an archive of all of Toronto's daily newspapers, stretching back to the late 1800s. I think we can find something here.

The newspapers show us that two weeks before the fateful night of August the 16th, a group of residents in Toronto's far eastern beaches neighborhood had come together to form what they called the Swastika Club. Members started to wear the swastika on their clothes to signal to Toronto's Jewish residents that they were unwelcome at the beach.

Hitler had come to power as chancellor in Germany on January 30, 1933. Toronto newspapers closely covered the horrors and violence of the Nazi regime over the following months. So by August, Toronto's Jewish community was extremely aware of what that symbol meant for them.

This brings us back to the baseball series between St. Peters and Harbord Playground and back to Joe Goldstein. The two teams first meet Monday evening, August 14, 1933, on this very spot, on this baseball diamond. St. Peters is leading, but Harbord come back to tie it in the ninth.

At that moment, a massive swastika banner is unfurled among the fans, its bearers urging St. Peters on to victory. It doesn't work. Harbord goes on to win it in the 10th.

That night, however, the words Heil Hitler and a swastika are found painted on the roof of the clubhouse in Willowvale Park. The following day, the Toronto Daily Star interviewed members of the so-called pit gang, the perpetrators of this incident, and they frankly admitted that, quote, "we want to get the Jews out of the park."

The two teams meet again on this very diamond the night of Wednesday, August the 16th. It's a fouly hot day, and the atmosphere is tense. A brawl breaks out among the fans before the game has even begun, and play has to be stopped in the second inning as more than 1,000 Jewish fans packed onto the western slope of the diamond brawl with 30 to 40 people who've been shouting Heil Hitler.

The game finishes well before dark with no more fighting. Won six to five by St. Peters, the players are all milling around on the diamond here when a large white blanket with a black swastika painted on it is spread out on a small rise to the south called the Camel's Hump.

The fans go ballistic. According to eyewitnesses, the Jewish players lead the charge, dropping their gloves, picking up their bats, and charging the Camel's Hump en masse along with thousands of spectators. Supporters of the swastika bearers also rush to the Camel's Hump to join the fight.

Bricks, bats, and lead pipes are deployed all in a desperate battle to possess that swastika flag. We don't know exactly what role Joe played at this point. We do know that around about 9:00 PM as things seemed to be quieting down, Joe was chased from one side of the park to the other to here, where he was beaten and knocked unconscious.

With the help of friends, he managed to struggle his way across the street to the home of Ms. Lillian Garfield at 47 Christie Street. Joe had a bleeding scalp and a head wound and was taken to hospital under police escort. And it was this moment that transformed what had been up until then, yes, a pretty big punch up into a full-scale uprising of an entire community.

Boys on bicycle sped down here to Spadina and College, the heart of Toronto's Jewish community. They spread the rumor that a Jewish youth had been killed. The community responded. In what seemed only moments, truckloads of shouting Jewish youth poured out of this neighborhood north to Willowvale Park with whatever makeshift weapons they could lay their hands on. They would shout to passers by, help, help. They're beating Jews. And passers by would join them.

This was a movement of an entire community, a community that had been ostracized and denied integration and equal opportunities. It was old rabbis and young boys who'd never been in a fight before, and it was not Jews fighting alone. Italian immigrants likewise had not been made welcome in the Toronto of the period, and many of them jumped on those trucks and headed to Willowvale Park to join in.

Would all this have happened if Joe Goldstein had not decided to go to the game that day? If he hadn't been hurt and hospitalized, would that rumor have begun that a young man had been killed?

It was that vital rumor that galvanized the immigrant communities into action, and it was this aspect of community participation in the riot at Christie Pits that made the event so significant. It helped pave the way for the multicultural city of Toronto that we know today. One small decision by one largely unknown human being helps to make history, and it all happened right here. I'm Giles Hodge. I'll see you around.

This collection of resources is designed to help educators integrate the study of traditional and contemporary antisemitism into their efforts at combating prejudices and stereotypes in the classroom.
Collection
Add to Collection

Help equip students to recognize contemporary manifestations of antisemitism and their origins using these resources.
Lesson
Add to Collection

Students explore antisemitic tropes, their troubled history, their evolution and their present manifestation in further depth, and consider the harm that their circulation can cause.
More Like This Teaching Resources Learning & Events
The resources I’m getting from my colleagues through Facing History have been just invaluable.
— Claudia Bautista, Santa Monica, Calif