Scholars discuss the events of Kristallnacht, a series of violent attacks against Jews in Germany, Austria, and part of Czechoslovakia in November, 1938.
Last Updated: April 6, 2022 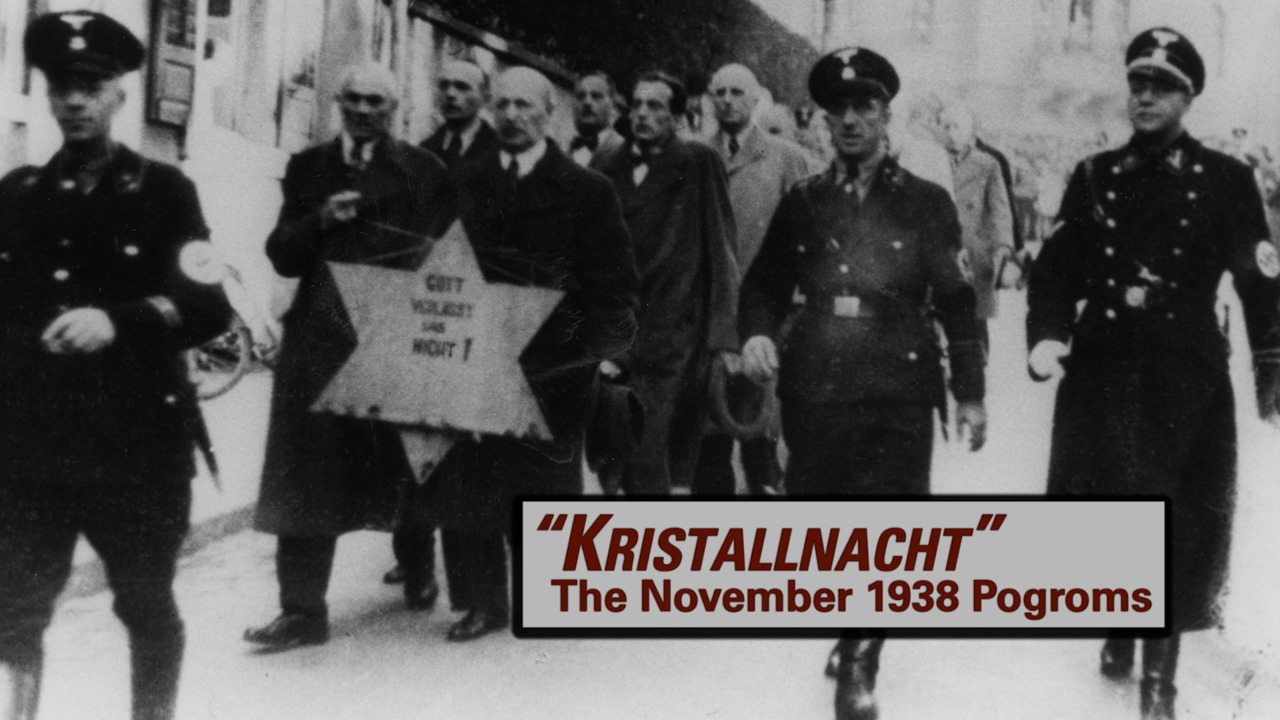 I call the events of November 1938 a pogrom because they fall in the tradition of violent, state-mandated actions against Jews, specifically against Jews. There was a long history of pogroms carried out by many different peoples at different times and this falls into that tradition. In early November 1938, a young Jewish man named Herschel Grynszpan walked into the German embassy in Paris and shot the Third Secretary of the embassy.

His parents were Polish Jews who lived in Hanover in northern Germany. They had been rounded up and they had been taken to the border between Germany and Poland and the Germans had tried to push them, along with about 30,000 other Jews, across the border into Poland. The Poles had refused to accept them and they stood there for several weeks in no man's land.

Grynszpan was desperately upset about what was happening to his parents and that's what prompted him to go to the embassy and shoot this person as a way of drawing international attention to what his parents were experiencing. And this, the German propaganda apparatus immediately drummed up as part of the international Jewish opposition to Germany.

The Nazi newspaper, the Völkischer Beobachter, published a report of this attempted assassination, and by November 8th, there were already wild cat attacks on Jews and Jewish property. So there was already stoking of popular resentment, hatred, and violence-- street violence. As ill luck would have it, the party leadership was meeting just at that time in Munich and it was a moment for them to show their loyalty to their Führer.

The party leaders wrote, telephoned, telegrammed the local party bosses across the country telling them to attack Jewish property and telling them that the police would not intervene, that the fire department would not quell the fires. It turned into an explosion of violence.

Most of the synagogues in the country were burned down that night, Jews' private residences were attacked, their furniture thrown into the streets. Thousands and thousands of shop windows, about 200 synagogues, burning in this way. It was a much more public act of violence than anything that had come before. This was open, manifest violence occurring in the downtowns of every major city in some of the most prominent places within the community, and occurring to places that had hither-to been regarded as sacred.

They burned Torah scrolls, they burned Bibles, they burned religious artifacts, they destroyed the very essence of what the synagogue represents. They also destroyed the economic infrastructure-- looted, ransacked, broke the glass, and they arrested 30,000 Jewish men aged 16 to 60. And they did so for all to see, none could not see it, none could deny it.

They see the leadership sees just how much they can get away with. A lot of this is this kind of pushing of the envelope and seeing how things are going to play out and how the general public is going to respond. And there was no uprising about the pogrom. Instead, ordinary Berliners referred to it as Kristallnacht, broken shards of glass, which need to be cleaned up.

Most interesting part of that is what happened three days later. They have a meeting in the economics ministry and the meeting essentially is to assess the damage of Kristallnacht. And the economic minister is not very happy because there were the destruction of 7,000 Jewish businesses, which in order to repair would have essentially meant that the entire foreign reserves would have to be used to buy glass.

They then said, let's come out with a total fine of the Jewish people equivalent to the damage that had been done. And once that happened at the meeting they decided, OK, let's go. Jews expelled from civil service, all businesses have to be transformed to non-Jewish by January 1st. And the meeting concluded with the following cynical words: "I should not like to be a Jew in Germany today."

In one respect, this was a radical departure from what had occurred before. There had been occasional street riots, there was a pogrom in a little town in Bavaria in 1933, but on the whole, the Nazis had not attacked Jews physically. On the other hand, it came at the end of a whole year of mounting persecution.

More and more German-Jewish owned businesses had been driven out of business, more and more restrictions had been imposed on the Jews of Germany-- they had been required to adopt identifying middle names, for example, their identity papers had been stamped with the red J, so on. In early 1938, there were more applications on file for visas to enter foreign countries than there were Jews left in Germany. That doesn't mean every Jew had applied, because sometimes they applied to multiple countries, but that does give you a sense of how clearly people understood that the future in this country would not be good for us.

So the violence on the one hand did not change the mentality of German Jews but it did increase the urgency of leaving. That's when the desperate migration began. The desperation to get out of Germany now, immediately, and the young people first because the young people were the future of the community.

Within the German Reich, it's clear that you want to get out if you're Jewish. Outside the Reich, the international response was outrage. It should have been more, we should have done more than we did. The US recalled its ambassador temporarily-- we didn't break up diplomatic relations with Germany at this time. The British, they recognized how dangerous the regime was. They started to facilitate the transportation of children to Great Britain and about 10,000 children came to the United Kingdom in this way.

It's a glass half empty, half full. Clearly there's international outrage. On the other hand, clearly the international community didn't do enough at this point. I don't think there was yet a willingness to stand up and protest and I don't think a protest would have made much difference to Hitler. We now know that that attack, first on property but then on people-- and it's the attack on people that I focus on-- that was the beginning of the end.

It was the end of any hope that Jews could have of living as Jews in Germany and it was the transition to systematic violence, which ultimately became slaughter.

These activities are designed to help students reflect on the devastating attacks in Christchurch, New Zealand.
Mini-Lesson
Add to Collection

This Teaching Idea is designed to help students reflect on how the movies, shows, and books we consume can reinforce stereotypes about Muslims and the harmful impact stereotyping has on people's lives.
Mini-Lesson
Add to Collection

Acts of Hate in Schools

Students learn about the overall rise in acts of hate in schools and examine a story that illustrates how acts of antisemitism, racism, and other forms of hate can overlap.
Mini-Lesson
Add to Collection

Use this Teaching Idea to introduce students to contemporary examples of Holocaust trivialization and prompt reflection on the question “What are the implications of comparing current events to the Holocaust?”
Unit
Add to Collection

After learning about the Armenian Genocide, students reflect on the writing prompt a second time by adding a historical lense.
More Like This Teaching Resources Learning & Events
Using the strategies from Facing History is almost like an awakening.
— Claudia Bautista, Santa Monica, Calif