Monsters and Men: The Nazis at Nuremberg 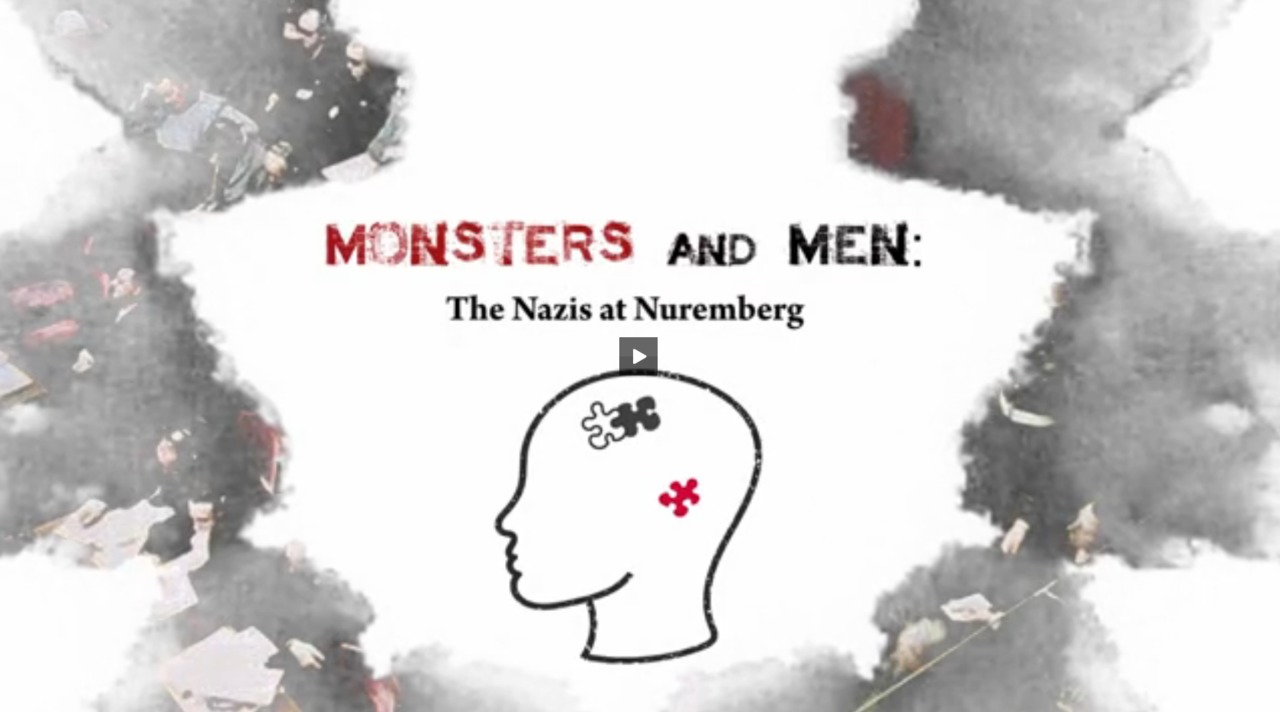 I think the image people have of Nazis coming from Allied propaganda and elsewhere is something almost otherworldly-- something demonic, something exceptionally sadistic, something just unknown of at the time. We had had genocides before in history. But we hadn't seen anything as state-sponsored, as bureaucratic, as seemingly ruthless and efficient as we were seeing in Nazi Germany. So the depiction of Nazis, I think was always similar to that depiction of the demonic evil villain in cartoons, and comic books as well, as something absolutely outside the bounds of humanity, because no quote unquote "normal human" would have ever, could ever, do something like this.

And I think that distancing piece for us is a psychological safety mechanism, because if I have to think very close that a perpetrator could be someone like me, I'm having to ask questions about-- could I do something like this? It becomes very invasive, in a psychological sense, for us to really try to come face to face with perpetrators. So the simplest explanation for us is, let's make them as distant from us as we can. They're monsters. They're creations of our nightmares. They're just unlike anyone we'd ever know.

In November 1945, in the town of Nuremberg, Germany, 24 Nazi leaders were tried for their roles in the Holocaust. Before and during the trial, the accused were given three psychological tests. One of these tests was a popular inkblot test of the period called a Rorschach test, named after the man who developed it.

A subject is shown a series of inkblots and asked to respond by what they see in the inkblot. What are the first thoughts that come to their mind? And the Rorschach is a specific category of a more general psychological test, called the projective test, where it's assumed that the stimulus is so vague that the respondent is going to project his or her personality into the answer.

So the Rorschach is intentionally vague. It's an inkblot. And you're hoping that the respondent is projecting some part of their almost hidden personality into their response.

One of the long-standing criticisms of the Rorschach and projective testing is that sometimes, the results tell more about the interpreter than they do the respondent. And I think early on, some psychologists looked at the Rorschachs from Nuremberg, and because they knew they were from Nuremberg and they were Nazi defendants, immediately just looked for pathology. They assumed pathology.

But over time, especially when we looked at the Rorschachs blindly-- in other words, we didn't know who the respondents were-- when psychologists looked at them blindly, the results of them were that, with one exception, every single one of the defendants tested at Nuremberg tested well within the bounds of normality.

The one exception was Julius Streicher, the editor of Der Stürmer. And for Streicher, we kind of saw that coming, because the other Nazi defendants at Nuremberg said before the trial started, we don't want to be tried with Streicher. So the other Nazis knew Streicher was disturbed. And his test results validate that finding.

But the other findings from the Rorschach at Nuremberg-- men tested well within the bounds of normality. What's fascinating to me is to look at how the general public interpreted that, because you have editorials from American newspapers saying things like, something must be wrong with the field of psychology if they can't find these men as pathological. So again, you see that distancing of-- I just can't accept that the architects of the Holocaust in Nazi Germany could in any way be defined as psychologically normal.

But I think over time, this has been one of those unfortunate lessons of history-- that we see genocide after genocide after genocide, and we realize with the thousands and thousands-- hundreds of thousands-- of people involved in perpetration that we can't restrict this to pathology, that there's something here that's so ubiquitous, almost, about the phenomenon that it pushes us to that uncomfortable place of saying, while there may be some psychopaths involved, the vast majority of people involved in the perpetration of these atrocities are quote unquote "ordinary people."

Facing History and Ourselves, “Monsters and Men: The Nazis at Nuremberg,” video, last updated April 20, 2022.