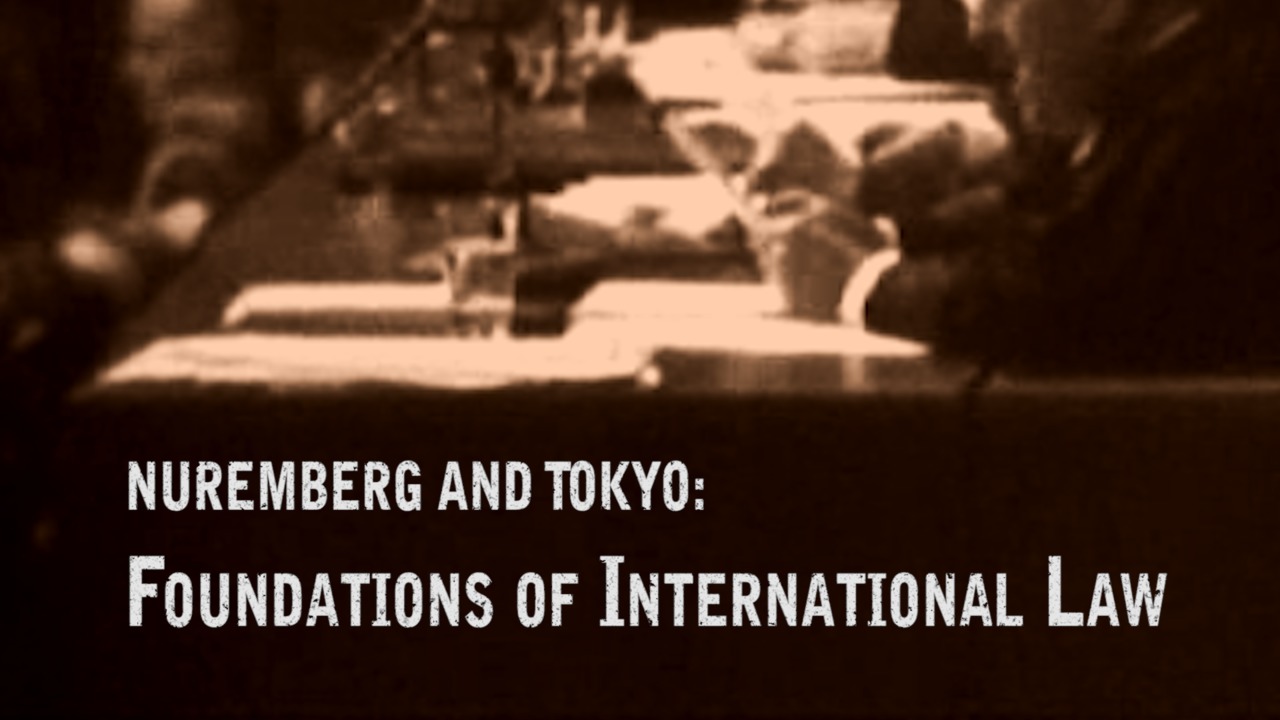 International law is that law that governs the entire global community. This law comes from a variety of sources. It comes from treaties that get drafted between nations. So we have a Genocide Convention, for example, which is a multilateral treaty, which means that multiple states can join it. And that treaty has prohibited the crime of genocide and has committed all states to work towards not only its prosecution, but also its prevention.

We have war crimes treaties. The so-called Geneva Conventions contain within them lists of war crimes, acts that must be punished if they are committed in the context of an armed conflict. So that's one of the sources of international law.

Much of international law is geared towards finding ways to resolve conflicts between nations, and even within nations, peaceably, without resorting to armed force. So this is one of the huge legacies of the post-World War II period.

The two first institutions in this system were international tribunals in Nuremberg, Germany, and in Tokyo, Japan. There were three crimes at issue. The first was called crimes against the peace, which today we would call the crime of aggression. They also prosecuted war crimes. This was the one crime that had been already established. There were some international treaties that outlined what were called war crimes.

It's often paradoxical to think about crimes of war, because we think war is about destruction. It's about chaos. It's about death. How can you then describe these as crimes? But for as long as human communities have been at war with each other, there have been rules governing those wars.

And some of them are very simple and intuitive. For example, you can't target civilians. Wars happen between combatants. They happen between governments. And at all costs, these warring parties should endeavor to protect the civilian populations.

The third crime was an innovation. And this is probably, I think, at least, the real legacy of the World War II period. And these are called crimes against humanity. The idea of crimes against humanity was to capture the targeting and mistreatment of individuals, regardless of whether there was a state of war or not, so for example, mass rape, mass killing of civilians, mass torture of civilians.

This idea was completely new. There had been no such thing prior to World War II. And I think that this idea of crimes against humanity was really the foundation upon which the entire system of international human rights was ultimately built, because it didn't depend on the existence of a war between parties.

The defense begins. Some make blanket denials of all guilt.

One of the criticisms that has been leveled against the post-World War II proceedings is that the systems made up new crimes, acts that were not crimes at the time they were committed. It had never been argued that committing a war of aggression was a crime. There was some discussion after World War I of crimes against humanity, but it had never been prosecuted before at the international or a domestic level.

The defendants made arguments in this respect. And they argued that these counts needed to be rejected, and they should be rejected by the tribunal, dismissed from the indictment. The judges agreed, however, that there was no way that these individuals could not have known that what they were doing was criminal. To launch a war of aggression and all the devastation that that would create, and to target for destruction and extermination civilian populations, to torture civilians, to rape civilians-- under no system of law could those acts be lawful. And so it was not unfair to prosecute these individuals after the fact.

So there were three crimes, as I mentioned, crimes against humanity, war crimes, and crimes against the peace. The question is, how do we weight these, right? Is one more serious than another? In many respects, the post-World War II trials were meant to be the trials to end all war. This was a quote that was used. So both of those proceedings, in Nuremberg and in Tokyo, very much focused on the German aggression and the Japanese aggression. These were the centerpiece of those two trials.

And that's one of the real revolutions of the Nuremberg period, the idea that states owe their own citizens certain basic obligations of fair treatment and humane treatment. And so, in Nuremberg in particular, we saw German individuals prosecuted for crimes committed against other Germans, German Jews and German homosexuals and others who were considered undesirable members of the German populace.

And so there's a dialogic process that happens in New York and in Geneva, in places where the United Nations happens, where slowly but surely, states are called to account. They have to answer for the accusations that have been made against them. They will sometimes make excuses, but often they will acknowledge that the situation is not as good as it should be. And they will be on record as making pledges to try and improve the situation.

So it's a slow process. It's a diplomatic process. It's not a very robust process. But that's the process that we've been able to create to date. And every year, we strengthen it in a tiny little bit, a tiny way. We strengthen those tools that we have. We sharpen those tools. And so, gradually, the system is getting stronger and stronger.