A Plea for Humanity: The Einsatzgruppen on Trial 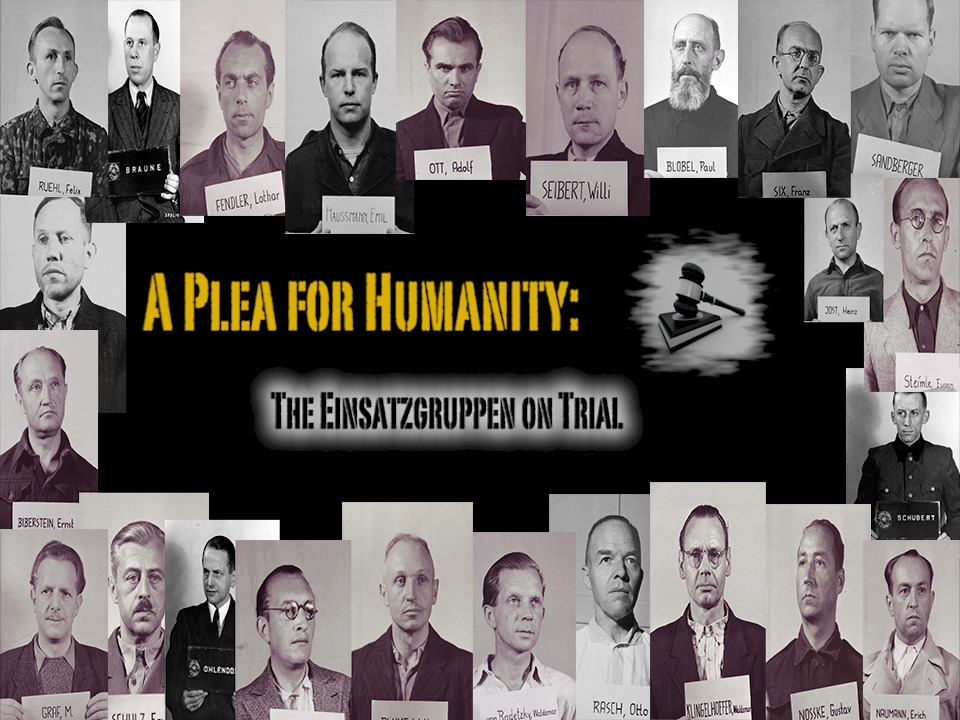 We are now ready to hear the presentation by the prosecution.

My name is Benjamin Ferencz, F-E-R-E-N-C-Z, which is a Hungarian name. It means Frank or Francis. I believe, to the best of my knowledge, I was the first man in the United States Army to deal with war crimes in World War II.

War crimes are acts and omissions in violation of the laws and customs of war.

I was traumatized by my experiences. I had to go into the camps as they were liberated, crematoria still going, dead bodies all around, digging up bodies with my hands, all of that. So I have no doubt that that had a big impression on me, and hating the army in addition-- put the two together, and you hate war. And I became convinced very early that war-making is the dumbest thing that people can do.

So I said, OK, I get the job. And I took off to Berlin. I immediately put together about 50 people to serve as researchers. I assigned them to different German embassies-- Gestapo, foreign ministry, army, and so on to go through all the archives which were still there. Most of them were bombed out. Occasionally, we'd hit a gold mine, absolute gold mine. And that was the Berlin-- we called it the Berlin Document Center.

From the outside or from the air, you see nothing but a little house, an ordinary cottage, almost. Underneath, subterranean blocks of archives, files, the entire Nazi Party file, everybody who had ever applied for admission to the Nazi Party, every officer who had ever been promoted, the letters of recommendation. Everything is all lined up.

So this was a gold mine. And I put staff there. And we'd identify the document, what it's for, what case it might be of value, in what case. Send it down to Nuremberg. If they wanted the original, we'd ship it. Planes were going back and forth all the time.

One day, one of the researchers, a guy from Switzerland, the name, unfortunately, I don't catch at the moment-- he brings me situation reports of the Einsatzgruppen. Now, Einsatzgruppen is word nobody has been able to translate, let alone pronounce. Technically, it means-- "Einsatz" is action. "Gruppen" is groups. And this would deliberately disguise the name so nobody would know what they did.

Their job, in simple, was easy. Murder all the Jewish men, women, and children you can possibly lay your hands on. And that was their job. And they report every day. And I got a little adding machine, a hand adding machine. I began to tabulate how many. I got a million people murdered. I stopped. That's enough.

I said, you can't let these guys go. It's cold-blooded mass murder. And I've got the proof right here in my hand. And he said, can you do it in addition to your other work? And I said, sure. He said, OK, you're it. So I became the chief prosecutor of the biggest murder trial in human history. I was then 27 years old. That was my first case.

Crime involved in this case is murder-- deliberate, premeditated murder, murder on a gigantic scale, murder committed for the worst of all possible motives. We earnestly suggest to the court that true judicial wisdom in this case counsels firmness rather than leniency to those adjudged guilty of this terrible crime against humanity.

The charges we have brought accuse the defendants of having committed crimes against humanity. It is fundamentally different from the mere war crime in that it embraces systematic violations of fundamental human rights committed at any time against the nationals of any nation, they may occur during peace or in war.

How do you plead to this indictment, guilty or not guilty?

I had learned at Harvard Law School the best evidence is contemporaneous documents. Never mind the worst evidence you can get is witness testimony. I said, I don't want any witnesses. I'll certify the authenticity of the report. But beyond that-- then it's an expert opinion. It's not a witness. I go with that and that's it. So I go and I make my opening plea, and a memorable plea.

This was the tragic fulfillment of a program of intolerance and arrogance. Vengeance is not our goal, nor do we seek merely a just retribution. We ask this court to affirm, by international penal action, man's right to live in peace and dignity, regardless of his race or creed. The case we present is a plea of humanity to law. We shall establish, beyond the realm of doubt, facts which, before the dark decade of the Third Reich, would have seemed incredible.

The slaughter committed by these defendants was dictated not by military necessity, but by that supreme preservation of thought, the Nazi theory of the master race.

And why did you kill all the children? Well, if they grew up and they knew that we had eliminated their parents-- they never used the word "killed," "murdered"-- eliminated-- they would be enemies of Germany. So of course we have to eliminate them, too.

And why did you kill the gypsies? Well, nobody trusts the gyps. You can't trust the gypsies. They'll play both sides of the streets. You got to get rid of them, too. And their children, too? Yeah, of course. That's logical.

Genocide, the extermination of whole categories of human beings, was a foremost instrument of the Nazi doctrine.

That was the argument made. And we had three American judges on that case. The presiding judge was Michael Musmanno, Superior Court of Pennsylvania, who was in the Navy during the war. He wrote the judgment. And he said, it's absolutely untenable argument that if you think somebody's going to attack you, you're justified going out and killing him and people who never threatened to attack you. They attacked all the other countries first. This is not a tenable argument. And they sentenced him to death in the name of the United States. And he was hanged.

I have never for a minute regretted the choice of a career trying to stop war. And I've realized all the problems there would be with it, that it won't happen during my lifetime. But I have seen the progress. So that drives me.

And since I have the progress there, and I am confident that one day they will recognize the simplicity of my three-word solution: law, not war. If you have a dispute, go to a court. Even if you get a bad decision, and even if the judges are corrupt, and even if they're stupid and it's the wrong decision, it's certainly better than war. I can tell you that from what I've seen of war.

Facing History and Ourselves, “A Plea for Humanity: The Einsatzgruppen on Trial,” video, last updated April 6, 2022.

Explore the digital version of our core resource on the Holocaust to find classroom-ready readings, primary sources, and short documentary films that support a study of the Holocaust through the lens of human behavior.
Unit
Add to Collection

After learning about the Armenian Genocide, students reflect on the writing prompt a second time by adding a historical lense.
Assessment
Add to Collection

Adding to Evidence Logs, 1 of 4

Students incorporate new evidence from the history of the Weimar era into the position they are developing.
Assessment
Add to Collection

Adding to Evidence Logs, 2 of 4

Students consider how what they've learned about the rise of the Nazi Party influences their thinking about the essay prompt and practice making inferences.
Assessment
Add to Collection

Adding to Evidence Logs, 3 of 4

Students review the documents and videos from previous lessons and consider what information supports, expands, or challenges their thinking about the essay.
Assessment
Add to Collection

Students reflect on, gather evidence for, and discuss the unit writing prompt in its entirety.
More Like This Teaching Resources Learning & Events
The resources I’m getting from my colleagues through Facing History have been just invaluable.
— Claudia Bautista, Santa Monica, Calif