The Psychology of Genocidal Behavior 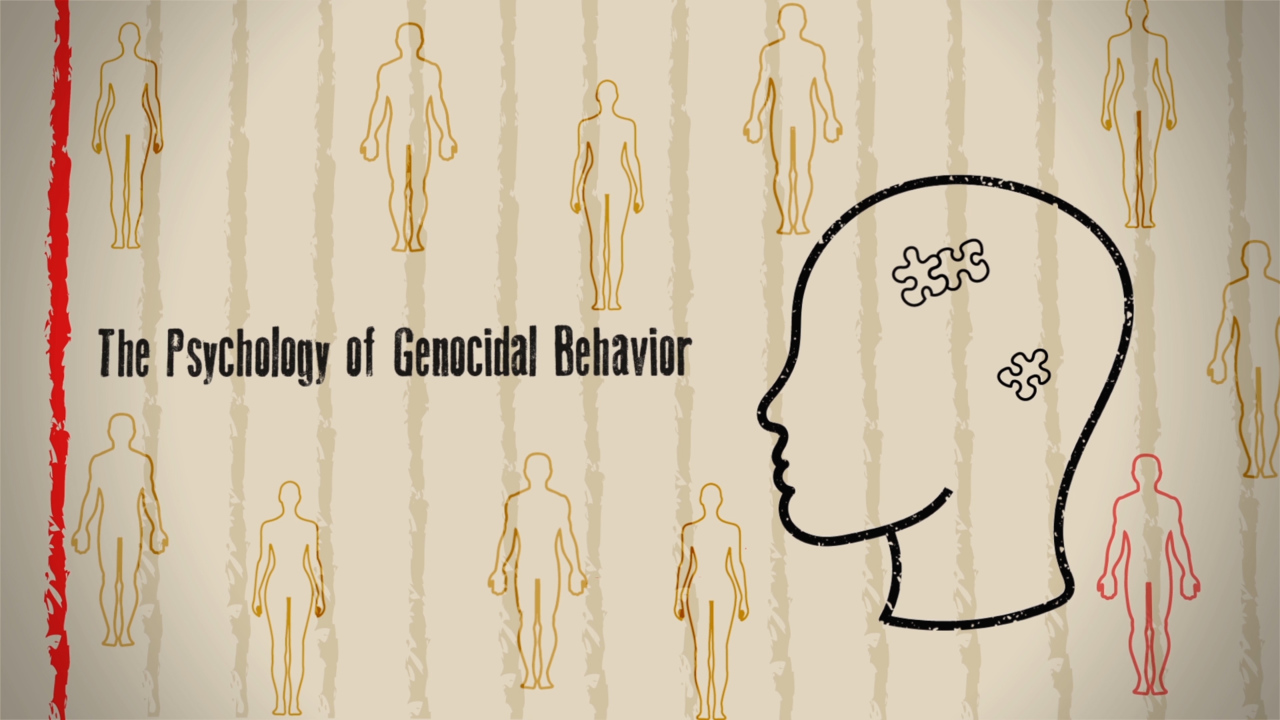 What makes a person commit genocidal acts? Were they born bad? Is there a gene that some people have that makes it easier for them to commit violence against other people?

What are the impulses? What's the baggage that all of us bring, in a universal sense, that helps us understand human behaviors?

How is it that an ordinary person, when given permission to kill in this way, can choose to do so?

What are the mechanics that they undergo, psychological and mental and moral, that allow them to commit these types of atrocities?

People tend to want to make this a very binary black/white discussion that we're all born good or we're all born evil. I think one of the things evolutionary psych has tried to explain to us is that what we're born with are a mixed set of psychological motives. Sometimes those motives can be triggered or activated for incredible good. It can be to our evolutionary advantage to cooperate in some group settings.

But there are other times that the group setting triggers a motive that can lead to some type of evil. It certainly can be our evolutionary advantage to be competitive in some situations, to be warlike in some situations, even to favor-- and we see this in very young infants-- to favor people who look like us or who have a voice that we recognize.

There's evolutionary reasons that those are good things for us to have. That protects us in some ways. But they can also become overgeneralized. They can also become triggered in certain social contexts, or they can be incredibly potent in terms of producing violence.

So I think, when I look at perpetrators, I'm looking at some of those basic characteristics of us/them thinking, or ingroup bias-- how I always favor my group. And again, we don't have to be taught to do that. I would argue that's something that is part of our psychological wiring. We're hardwired to think about ourselves and our world in terms of us and them. That has some good beneficial parts to it, but it can also be activated in some pretty destructive ways.

So if it's that basic, if it's that easy to activate, imagine how it can be drawn on. You think of high school rivalries in sports, or groups or gangs or cliques within high school, or college athletics. And then you go to the larger nation-state countries. We're primed to think about the world in this us/them way. We don't need competition for it.

So when the regime in power decides to say what's important is who we are, and we define that in large part by who we're not, they're not having to work miracles to do that.

Christopher Browning's work on Reserve Police Battalion 101 spoke very clearly about the impact of this type of conformity and peer pressure that existed within this, not selected group of killers, but group of ordinary people who came together and were tasked to do something extraordinary. The things you and I get from group membership, they got from group membership, even though it was a group of killers.

I think the great part of human experience is that all of us carry multiple identities based on race, ethnicity, gender, religion, sexual orientation. It's like we're all a diamond. We all have different facets of identity.

When it gets to the point that the group says, and you can't even be, that's when we got to that point of genocide.

I think back to the testimony of a Holocaust perpetrator who was asked on his trial by the prosecutor, "How did you come to think it was right to kill Jews?" And his response was incredible. He said, "It's not that I thought it was right to kill them. I thought it was wrong if I didn't kill them." That's a completely different level of moral reorientation in saying it's not just OK to kill them. If I don't kill them, I'm doing something wrong.

One of the compelling questions of identity is how quickly subidentities can be activated, and people who thought they were part of us can overnight become part of them.

I'll be honest. If there was some crisis in America today that we began competing for resources, I'm protecting my family. I mean, those people close to me will become my predominant moral obligation. People that last week I may have helped or assisted in some way, they're going to be lower in that hierarchy of people I would step up to help. And it's not flattering. It doesn't make me feel good about myself to say it. But I do think it's just part of, in many ways, how human nature has evolved.

What I hope we understand from this is, if our world was afflicted by a disease or our community afflicted by a biological disease that was killing thousands of people, I don't think any of us would be satisfied with kind of closing our eyes or sitting back and saying, I have no idea what this disease is, but I just hope it stops some day.

When I look at trying to understand perpetrator behavior, I'm looking at it through the same lens. If we can understand the tiny things that transform ordinary people into perpetrators of this type of extraordinary evil, every one of those tiny things gives us a window to prevent that behavior.

So the question is then, how do we structure our societies and our schools and our family system so that we're taking advantage of these predispositions toward kindness, toward goodness, toward strong moral character? How do we redefine our moral world in such a way that it's not restricted to just a few people, but it becomes much more inclusive?

One of the questions I often get about perpetrators is, how did they turn their morality off, or what happened to their moral compass? They don't turn anything off. They just redirect their morality in a different direction.

But the great hope that animates much of the work I do is that genocide is a human problem. It didn't come from somewhere else in the world. We created it. We still create it. And if it's a human problem, I absolutely believe it has a human solution.

Facing History and Ourselves, “The Psychology of Genocidal Behavior,” video, last updated April 19, 2022.

Investigate the Truth and Reconciliation Commission of Canada and its role in helping individuals and the nation overcome the historical injustice and trauma of the Indian Residential Schools system.
Chapter
Add to Collection

History in Search of a Name

Examine the debate that led to a declaration describing the Canadian government's colonial policies toward Indigenous Peoples as “cultural genocide.”
Chapter
Add to Collection

Explore the efforts of leaders and activists advocating for indigenous rights and culture, including young people using their history and culture to build bridges toward others and the future.
Chapter
Add to Collection

Explore how language and culture shape identity, and learn about the challenges faced by the Indigenous Peoples of Canada to preserve their traditional identity.
Chapter
Add to Collection

Examine how Indigenous identities in Canada have been shaped by the ways European settlers responded to real and imagined differences between themselves and the Indigenous Peoples.
Chapter
Add to Collection

The Indian Act and the Indian Residential Schools

Learn the history behind the legislation and policies created by the Canadian government in the nineteenth century to dispossess and assimilate the Indigenous Peoples.
Chapter
Add to Collection

Read firsthand accounts from survivors of their often profoundly painful and damaging experiences at residential schools.
Chapter
Add to Collection

Learn about the apologies offered by the government and churches of Canada to the Indigenous Peoples, and consider the role of apologies in transitional justice.
Chapter
Add to Collection

This collection features powerful accounts of the Holocaust, told by survivors, rescuers, and witnesses, selected from USC Shoah Foundation’s Visual History Archive.
More Like This Teaching Resources Learning & Events
The resources I’m getting from my colleagues through Facing History have been just invaluable.
— Claudia Bautista, Santa Monica, Calif