Reconciling Identities after the War

Romana Farrington, whose Jewish parents arranged for her to be raised by a Polish Catholic family during the Holocaust, describes how her wartime experience impacts her identity.
Last Updated: April 14, 2022 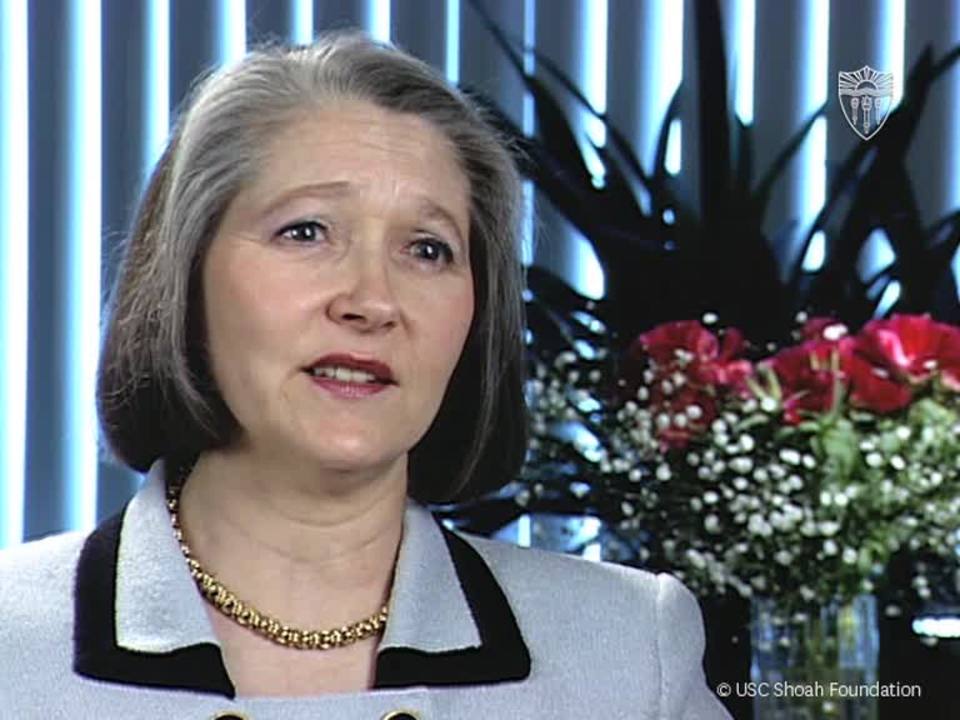 My mother took me and placed me in one of these-- I don't know how you say these things, actually. It's just sort of like a setup where you put a kid in and you cover the child so it won't be cold, et cetera. And so she put me into that, and she also placed, on my neck, a cross. And she wrote a letter.

Plus, I think she left still a few things, whatever she had, and she wrote a letter specifying that she is in the Underground, and the Germans are after her. And they most likely will catch her. So she would like, at least, for her daughter to be alive. So, please, take her and take care of her. If I'm going to survive the war, I will come and try to claim her back. But I doubt very much that I will be a survivor. So please take care of her, and I did not have a chance yet to christen her. So please christen her. And God be with you. And that's it.

And they went to the village specifically because they were told-- they were known for helping the Underground. And as a result, they believed that village like that would be a good place for a child to be found and to be safe. I was brought up having Jesus Christ over my bed and Mary. And I was extremely religious little girl.

And so you can imagine the shock later on when I found out, actually, that I was not Roman Catholic, but my real parents were Jewish. It was a very traumatic experience for me. Number one, we're the only Jewish family once my parents did get me back, my real parents. So it truly was a very traumatic experience for me to hear that. And I felt embarrassed. I felt ashamed of having Jewish parents. Even though I felt I wasn't a Jew-- I was christened, I was baptized, yes? So I felt that I should not be criticized like that.

What do you remember of that day when your mother returned?

My mother didn't know what to do with me. I mean, she was extremely nice to me. Understanding, and she certainly allowed me to have all my pictures of the Jesus over my bed and things like that. So I just continued having the pictures, praying to the only God I knew. And as it turned out, both of my parents were not religious at all. So it's not like I had something to learn from them other than Roman Catholicism. I didn't.

As a matter of fact, my father hated religion with passion, my real father. And my mother is completely, totally not religious at all. So I never was shown anything else. So I stayed basically with Roman Catholicism for the rest of the time I was in Poland. And no matter how many times I would go to church and pray to God, whatever, I still-- I was very discriminated against. Kids were calling me a dirty Jew anyway.

I always prayed for not really being a Jew, that some miraculous thing would show me that my parents are not Jewish, either, that we are fine, that we're just normal like everybody else. It was a very, very terrifying time. I guess I started feeling more and more that-- and I still feel that today-- if there is God, and there is God, there is one God for all of us. And people just name the God different ways and pray to the God different ways, but it's only one God.

And so, therefore, I don't have any problems feeling very comfortable going into church and saying my prayers that I know or going to a synagogue and still saying my prayers that I know. So it doesn't matter to me, because I feel very comfortable in any place, I guess, in a way much more so than both of my parents. To me, it's just, I really, I like churches. I like synagogues. And I don't feel that this is any inconsistency.