Step By Step: Phases of the Holocaust

Scholar Doris Bergen describes the phases of events that led to the Holocaust.
Last Updated: April 15, 2022 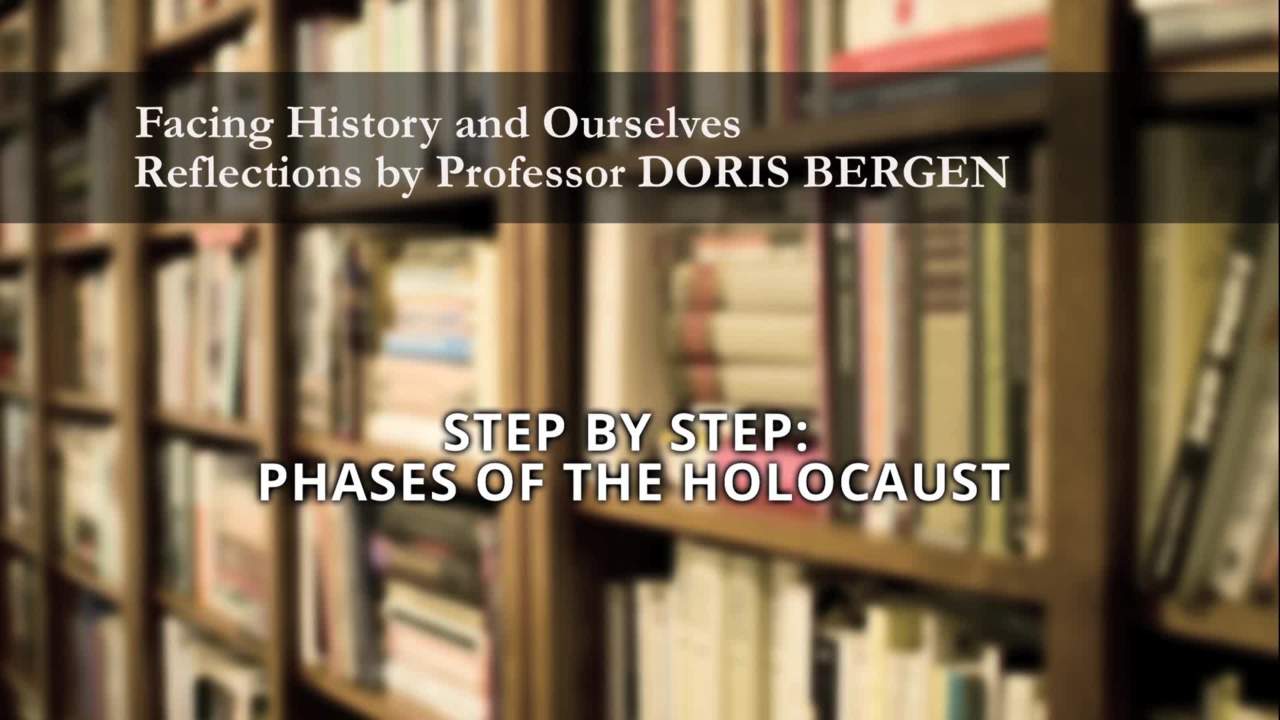 It seems to me you can't overestimate the importance of chronology.

People often ask how did the Holocaust happen. And I think one of the answers you have to give is step by step.

And to understand this process step by step, you need to think about time and dates. You need a few dates because you've got to be able to break this step-by-step development into some phases.

There's really, I think, four key phases for thinking about the Holocaust. And the first one is the German phase. Hitler came to power in January 1933. Until September 1939, Germany was not officially at war. Those six years are a very particular phase of development of the Nazi project where a lot of steps were taken inside Germany to isolate German Jews from the rest of the population, to start measures sterilizing, isolating, and eventually even to start killing, to rearm Germany to prepare for the war of conquest, but also to cover up that rearmament by talking peaceful intentions publicly so that people elsewhere in the world wouldn't be too alarmed.

So there's a lot of preparation that occurred in that phase, '33 to '39, to get the German population on board. And I think often when studying the Holocaust, people want to rush straight to the gas chambers. But you don't understand how you got there without seeing that phase of preparation.

I think you could say a second phase, let's say, September 1939 to June 1941. Extremely important phase of taking Nazi violence and expanding it from outside of Germany into Poland, into Western Europe, France, the Netherlands, Belgium, and also Norway and Denmark. And there you see an increase in violence, mass violence against subject populations, people with disabilities, ghettoization.

Other, almost, experiments and conquests on a much larger scale coupled with a war of domination, but still with certain limits, territorially. And then with invasion of the Soviet Union it's like absolute, you know, the next line of mass killing. Einsatzgruppen, the killing squads that accompanied German armies as they went into Soviet territory. Even ghettos and labor camps that had existed in Poland since 1939, many of them liquidated, which means the people taken out of them and killed. And then '41 to approximately the end of '44, this is a period of absolute, you could say, dedication to mass killing.

Soviet prisoners of war, Jews of Eastern Europe, Western Europe, Southern Europe sent to Auschwitz to be killed. Starving of civilian populations, including non-Jews. Treblinka, Sobibor, those weren't concentration camps. People didn't live there. People were sent there to be murdered.

The last five months of the war, January 1945, liberation of Auschwitz until May 1945, the end of the war, you might think, well, then surely the killing would have stopped and people would have tried to go home. But there you have the emergence of another, you could say, form of mass killing.

No more gas chambers, right? Auschwitz was liberated. Those earlier camps, Treblinka and Sobibor, they were closed even sooner. Death marches were the method of killing.

As guards and the administrators emptied out the sites of concentration camps, labor camps of all kind, they put those remaining prisoners into big long columns and they marched them. Those death marches-- they get that name because they were deadly. So many people who'd survived months, sometimes years, in certain kind of camps, they were shot along the way by the Germans. Sometimes they were killed by Allied strafing and bombs and stuff because they tried to destroy the roads so the Germans themselves couldn't retreat.

Sometimes they died of disease, you know, so close to the end. Sometimes people ran away from the column and the guards shot them dead. Other times, they ran away from the column and they were able to blend in with the local population. Sometimes, obviously, they made it. But it's estimated maybe a quarter of a million people died in those last months of the war just in those death marches alone.

Facing History and Ourselves, “Step By Step: Phases of the Holocaust,” video, last updated April 15, 2022.

Students are introduced to the enormity of the crimes committed during the Holocaust and look closely at stories of a few individuals who were targeted by Nazi brutality.
More Like This Teaching Resources Learning & Events
Using the strategies from Facing History is almost like an awakening.
— Claudia Bautista, Santa Monica, Calif