Facilitate thoughtful group discussions by having students first share their ideas in writing and with a partner.

About This Teaching Strategy

In an activity based on the Think, Pair, Share strategy, students write and discuss their ideas with a partner before sharing them with the larger group. This format gives students the opportunity to thoughtfully respond to questions in written form and to engage in meaningful dialogue with other students about these issues. It is a helpful way to give students time to compose their ideas before sharing with them with the class. The Think, Pair, Share strategy helps students build confidence, encourages greater participation, and often results in more thoughtful discussions.

Have students reflect on a given question or write a response in their journals.

When the larger group reconvenes, ask pairs to report back on their conversations. Alternatively, you could ask students to share what their partner said. In this way, the strategy focuses on students’ skills as careful listeners. 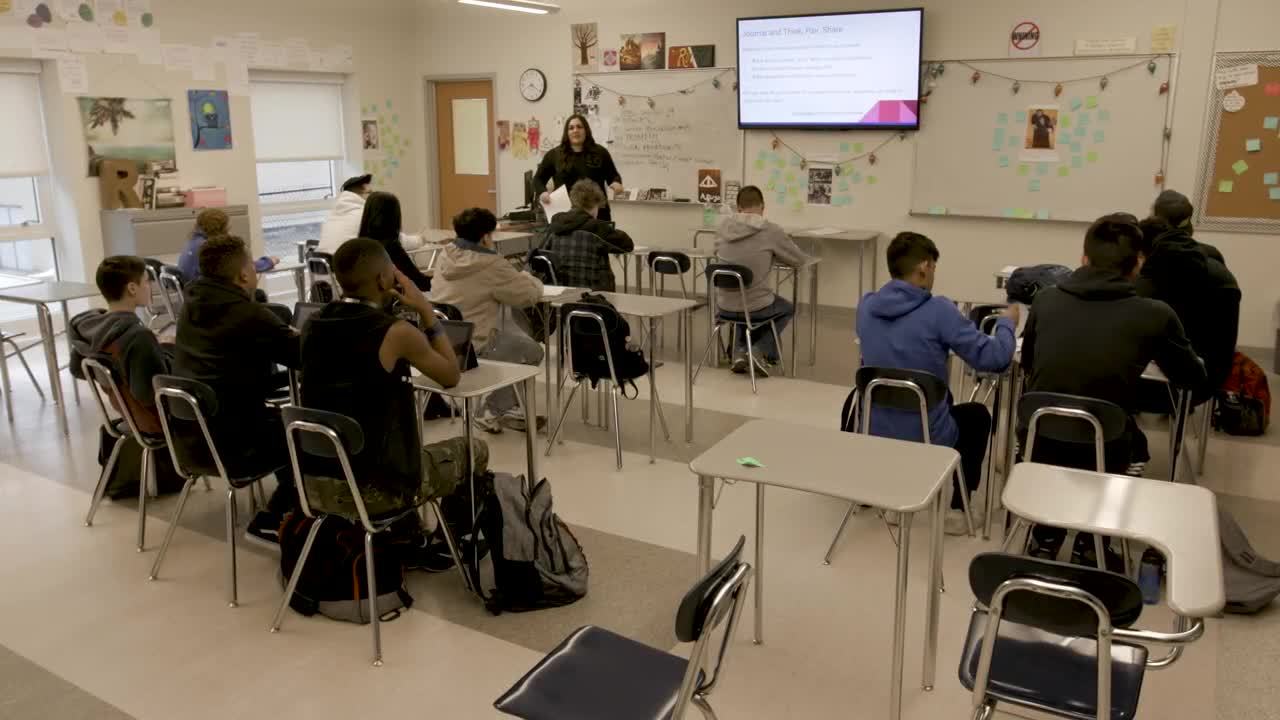 JACKIE RUBINO: Today we'll start the class with a Think-Pair-Share activity. So basically, I'm going to present the class with three questions, and they're general questions that just ask the kids to reflect on some big ideas. They'll be asked to pair up or just get with a couple of people in their vicinity. And they'll talk about their opinions on the different questions that they were asked and kind of engage in this conversation. Some may agree with each other. Some may not, but they'll have the discussion. And then after a few minutes, I'll ask them to come back together as a class, and I'll ask one person from a group to share out either their own opinions, or they could share out opinions of others that they found interesting in their groups or their partners' opinions.

So I think the Think-Pair-Share strategy is very effective because students get to kind of vet out their thoughts before sharing out with the class. Instead of being asked a question and being asked to think about it and then respond right away to the whole class, they can engage in discussion with their classmates and kind of throw out some ideas and really put their thoughts together before they have to share it out to the rest of the class. And it's a little bit more of a safer environment to share their opinions than just kind of making them think of something on the spot.

While we're getting settled, I just want you to take out your journal. So you can either do this on your iPads, or you can do this in your notebooks, or on a piece of paper. And I want you to think about these three questions. You don't have to go into too much detail. 1. What do you give when you grant forgiveness to somebody. 2. Are there actions that are unforgivable. Is there something in your mind that's unforgivable? And then what would the world be like without forgiveness?

So I'll give you some time. We'll say, about five to seven minutes to work on this.

All right. So turn to or move to someone near you, and I want you to just talk about these three questions.

STUDENT 1: Some people who practically beg and they're not going to find it if people don't forgive them. And it's, again, like the whole inner peace thing. It brings you inner peace if you can forgive. If you can't, well, that's going to be a big problem.

STUUDENT 2: Maybe about a world without trust and honesty. Because on this type of situation, you're by yourself. You don't really trust anyone. You're really trying to be a survivor in the situation from everyone, not from just yourself. What do you have?

STUDENT 3: For me, I had the world would be filled with a lot of grief between people. Because, like I stated before, if you don't give that person some relief, then they're going to keep on pushing until you actually forgive them, thus-- and without trust or honesty between people. And that would eventually grow to a little bit of ravaging chaos.

When I think when you grant forgiveness, for people who caused the problem, they feel like a certain amount of guilt. And the only way to relieve that guilt is for someone to forgive them. So that way they could be relieved from that intense pressure that they have on themselves.

JACKIE RUBINO: Interesting. That's like really appropriate for what we're going to read today. So hold onto that thought.

All right. So let's get back together. Feel free to share any thoughts that you had, or anything that you thought that someone in your pair or your group that you found interesting that they said. OK? So let's talk about the first question. So what do you give somebody when you actually give them forgiveness? Joey.

JOEY: You give them release of this since they caused it to themselves and others.

JACKIE RUBINO: OK. So you give someone release of something that they caused or that they were guilty of?

JACKIE RUBINO: Good. What else would you give people?

JACKIE RUBINO: OK, so you're giving them another chance. Lewis?

LEWIS: I'd say you relieve them from the grief they've built up. Like when there's a problem, and the person is the cause of the problem, the only way for them to feel a bit of closure is for you to forgive them.

JACKIE RUBINO: Yeah. So you're giving someone relief and closure. Good. Any other thoughts about that?

STUDENT 6: You're giving yourself peace, not only them. Because if you hold onto a grudge for too long, eventually it's just going to start building up to the point where you just can't handle either certain situations, or you can't handle people. And just pretty much messes you up.

JACKIE RUBINO: Yeah. So you're forgiving someone, but you're also helping yourself out too. That's how it works. Lewis?

JACKIE RUBINO: Good. So that's a really good point. So you're saying that some people find some things more forgivable than others. Right? Which is important, again, based on what we're going to read today. That's a really important idea. So everything that you guys are saying, you're going to be thinking about this in context of a story. Anything else that you find unforgivable, that might be considered unforgivable? Mark?

MARK: I said any action is forgivable, but it's all dependent on whether the person feels that you deserve their forgiveness. And whether they feel that you truly, really are regretful of what you've done and that you really want forgiveness, no matter how many times you've done it, or what it is. A lot of things people don't forgive other people because they don't feel that you deserve forgiveness because of how bad the action is. But if they truly feel like you deserve it, no matter the action, they can still forgive you.

JACKIE RUBINO: OK. That's a really good point. Hold onto that thought as we continue through this lesson, OK?

They were able to have some really good discussion with their classmates and their groups about their opinions. So I think that they did a really nice job sharing. I think that everybody was able to have a voice today. Not everybody spoke out to the whole class, but everybody did get a chance to give their opinion to at least their partners, which is what I was looking for today. Think-Pair-Share is something that we've used many, many times in class. I think it's very effective.

Today they got a chance to work through some big picture questions at the beginning of class. And by talking to each other before they're being asked by the teacher to speak out to the whole class, it gives them a little bit more of a safety net. They can talk out their opinions to each other. They can kind of get a chance to have their classmates respond to their thoughts. And then once we all come together, they've already kind of gone through this process where they speak out their thoughts, and they don't have to feel so nervous to be like cold called upon.

And it's not like I'm asking them a question, and then they just kind of are supposed to come up with an answer right there. They get a little bit more processing time, and I think that's really important, especially if you're asking students to talk about things that are really tricky and kind of heavy subjects. You can't expect them to just produce an answer out of nowhere. So it gives them that processing time.