Holocaust survivor Vera Laska describes her teenage experience as part of the resistance against the Nazis in Czechoslovakia.
Last Updated: April 13, 2022 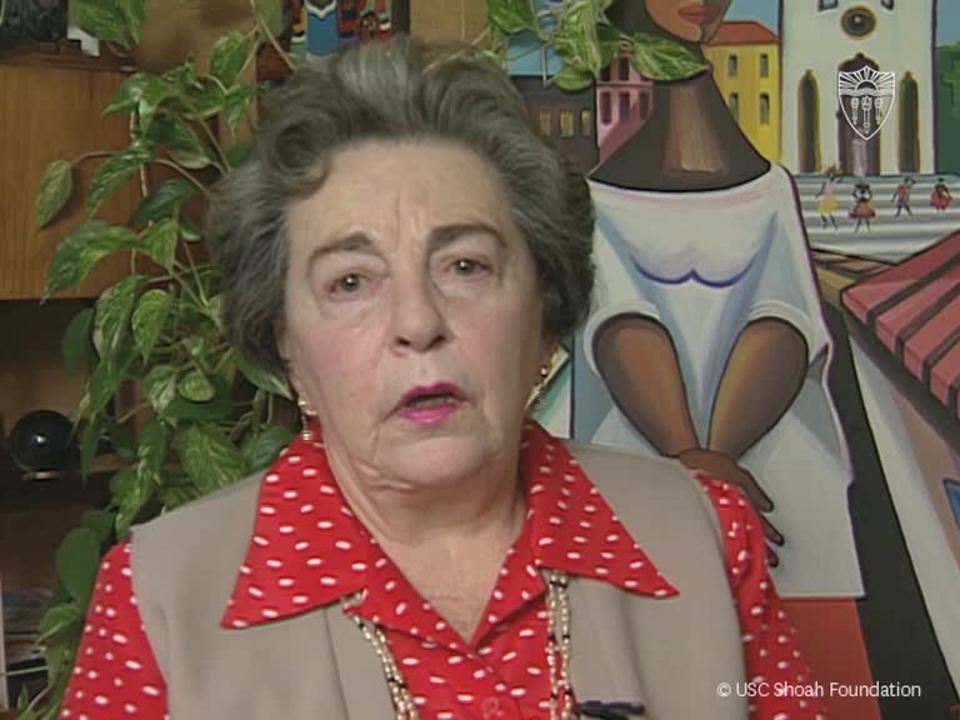 What were the circumstances that led to your involvement in the Resistance?

You know, I sort of slid into it willy-nilly via sport, in a way, because a friend of mine was approached by the Resistance, which was leading or organizing the underground railroad from Slovakia to Hungary, from Hungary to Yugoslavia, and so on. And she was approached and said, Hey, there are some French prisoners of war who escaped. But they didn't even say that, just two Frenchmen who want to get to Hungary. But they don't have papers.

Would you lead them across the mountain? Do you think you could cross the border in the mountains so nobody would see? And my friend said, well, maybe, maybe, if a friend of mine could come too. I don't want to do it alone. And she asked me. And I said, sure, why not? Why not? But it wasn't like, this is the Resistance, sign here. So, very casually.

And after we did that and it was successful, they said Well, would you do it again? Sure, we would do it again. So then we realized, hey, we are in the Resistance. So maybe I shouldn't admit that. But that's how it happened. Not everybody was, rah, rah, I am going to join the Resistance.

And then we stayed. Now, that was our decision. And from then on, that we knew what we are doing, it's our merit, OK? But how we got into it-- sort of, it was very casual.

And then of course, once we were in this enterprise of taking-- we called them Pierre. Every Frenchman was Pierre. We took the Pierres over, which wasn't too difficult. I have a slightly funny description of that in my book, how we got them through, tried to teach them skiing. It was hopeless.

One thing I remember is a couple who had silver candelabra-- very beautiful, I must say, if I remember correctly. It must have been very valuable, but very heavy. And we went on the mountains, you know-- uphill, downhill, uphill. And they just go, oh, I cannot carry it. Would you help me? And so then we decided that before we go, we will look what people have. And if it's silver candelabra, no way.

One couple carried a teddy bear, which I still remember, just a little teddy bear. But that doesn't weigh so much. One woman came in high heels. And we said, please change your shoes. Well, she doesn't have other shoes. Said, you won't make it. And you cannot go shoeless because of stones and what have you, or it was winter, or whatever.

And we had trouble with the husband. He gave us hell. And so I remember there was a sharp exchange of words, because he said something like, we are paying you so you do as I said. And I said no, you're not paying us. Nobody's paying us nothing. We are risking our necks. So no high heels.

But then, of course, trouble started with the Jews in Slovakia. And so the Jews started fleeing. And evidently, somebody from among the Jews contacted that Resistance leadership. And so then they said well, no Frenchmen this time. But there is a Jewish family. Would you take them?

So we said, well, why not? Make no difference to us. And I think we must have looked at ourselves like, wow, look what we are doing. We are spiting Hitler, which is the basis of the Resistance.

And so from then on we started taking Jews. Here and there another Frenchman got away from a camp in Poland. But then we took Jews. And that, again, is in my book, description of what troubles we had with some of the people, passengers that we took.

How old were you when you were doing all of this?

Well, I was a teenager.

Were you one of the younger members of the Resistance?

During the time that you've described, you were still working from your home town, is that correct?

Yeah, more or less. Most of the time, yeah.

Was your mother aware of your activity?

No, no. My mother would have fainted or done something like nice ladies do, hearing about that.

Did anybody know, anybody in your--

How did you receive your instructions? Who gave them to you?

And can you describe your arrest? Where were you? What happened?

Well, it was very simple, as a matter of fact, because they caught me on the street. ID, please? They looked at the ID and said, that's a false ID-- which I knew, of course. And I was taken to the police. And there I met my two friends.

And this was where?

For a few moments.

I'm sorry, this was where? In which city?

This was in KoÅ¡ice. And we were in jail for several weeks, not many. Less than a month. And then this one day, they just took us-- in a car, as a matter of fact, I don't know where they got the car-- to the railway station and stuck us into a train. And that was it. And we ended up in Auschwitz.